Sorry if my race report is a bit long but let me start off by complimenting Chef Sandy Finucan on the fabulous ham-mushroom-bacon deep-dish quiche she prepared Saturday afternoon before the race. This delightful dish gave me to the power to finish strong.
I awoke Sunday morning at 2:30 AM (fall time-change) for the drive to Cocoa, Florida, for the Riverfront International Distance Tri on the Indian River. My 186th triathlon and probably my last tri of the season and the 65-69 Age Group. Arriving plenty early as you never know what can delay you (and I-4 was closed for an accident, and I detoured) I got the bike staged and prepared for my longest race in 2022.
The .5-mile swim start was staggered with 2 swimmers jumping off the pier at 4 second intervals. Immediately I felt the much-discussed thimble jellyfish sliding over my body. They don’t sting but felt like Jell-O blobs passing over you. I had a strong swim, almost 2 minutes faster than 2021 at 18:36, for first.
Heading out on the 20-mile hilly bike course (shortened 4 miles due to construction), I watched the scattered showers approaching off the Atlantic Ocean. Sure enough, rain started about mile 4 for 5-10 minutes. Nearing the turnaround for the first loop, it began again and then again around mile 16. The sun shone brightly between the showers and there was a 10-mph headwind on both return loops. I passed #42, who beat me out of transition at mile 3 but he passed me at mile 12 as I slowed to refill my aero bottle. I retook first place at mile 14 and rolled into T2 about 68 seconds ahead.
Starting the 6.2-mile run in 84’f sun, I felt very strong and was 84 seconds ahead of #42 at the first turnaround. I lost him at the second turnaround as he removed his bright yellow top and moved his number to the side. At the last turnaround, my lead had shrunk to 48 seconds, so I stepped up my pace. Suddenly, at mile 5, my right hamstring cramped badly, stopping me instantly. I stretched it out repeatedly and tried running, but it cramped again. Stretching again in the middle of the street, I saw #42 pass me and I thought that my win had gone. He was about 100 yards ahead when I realized I could run again and began the chase. I ran slowly, gradually building speed as I saw I was closing. With about ¼ mile to go, I realized he had slowed, and I surged past him. I didn’t want to look back to see if he was chasing until the last turn and I saw him about 2 blocks behind. I pushed hard to the finish and won in 2:33:56, 42 seconds ahead of #42. Very happy with this win, as it was tough. 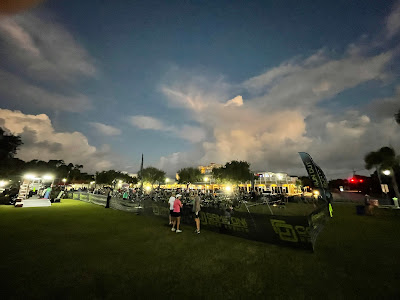 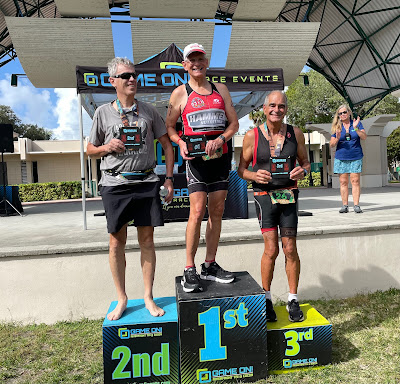 Posted by Jack Finucan at 4:44 PM No comments:

# 185 The Great Floridian Triathlon in Clermont

Full iron-distance athletes went off in the dawn at 7:30 AM, followed by the half group at 8:15. My Sprint started at 9:15, air temp 55’f, water temp 68’ with a 10-mph breeze across the lake. I brought my wetsuit but decided to skip as the temp was borderline for me.

It was cold but the chop was the difficult part. Lost a minute in transition putting lube on a heel blister and my bicycle leg was one mph slower than last year due to the wind and several holdups behind groups of cars. I had a great 5K run though, with 9:04 splits and took 1:30 off my last year’s finish with a 1:11:24. Achieved a podium spot with a 3rd out of 7 in 65-69.

Friends Rob Marens, Kenyon Congdon, Bill Black and Enrique Mercado were there, and I ran into Jeff Cuddeback making a brief stop on a training ride. Also met a women named Naomi Youei in Hammer gear; she was doing the run leg for Nicholas Castellano as a Hammer Nutrition team. Got there early so the Hammermobile was in the first spot. Passed out a lot of samples to people. Great day in Clermont! 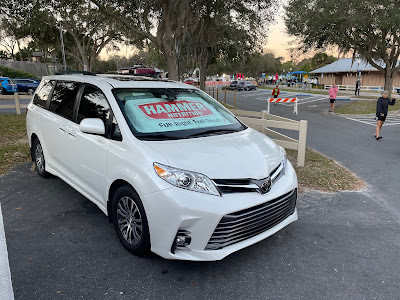 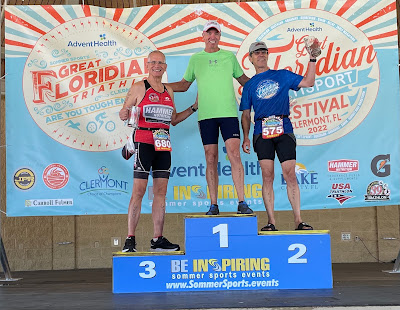 Posted by Jack Finucan at 3:06 PM No comments:

Triathlon #184 is done on October 15. Got up at 2:00 AM to drive to Crystal River on the Gulf of Mexico. Fourth place out of eight in Male 65-69; ten entered. Too many fast old guys in Florida!
Ok swim with a strong tide, fast 15 mile bike averaging 18.5 mph and solid 5k run. 15 mph headwind out on the bike course but I was rolling at 22+ on the way back. The run is a bit odd as the road is heavily slanted on the curves. Very happy results! 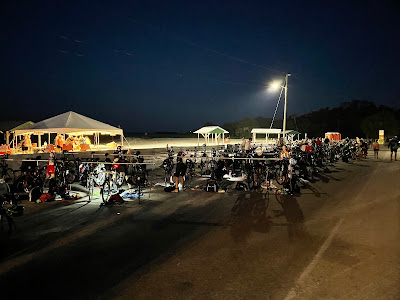 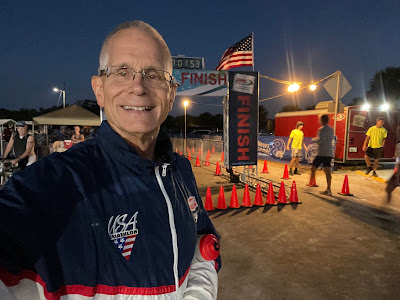 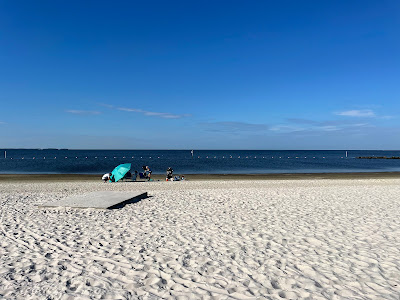 Posted by Jack Finucan at 2:42 PM No comments:

Great triathlon today, for my 183rd!

Also, yesterday was the two year anniversary of my bike crash and broken collarbone.

Lots of friends there and all had a great time. Got to meet Chris Nicik, first Downs Syndrome Ironman Finisher. The last photo is of two amazing guys!

Posted by Jack Finucan at 7:37 PM No comments:

Fabulous race Saturday at Sommer Sports Triathlon #3 of the 4 race series. This was my 182nd triathlon and I am definitely back after my May bike accident.  My finish last month of 1:28:02 for 5/7 was surpassed with my time of 1:19:24 for a 3rd place out of seven.  My fastest time since July 2019!  All six others in my age group are 65 and 66 year old so I'll leave them behind when I move up to 70-74 in January 2023. The slight overcast and cooler temps helped today too.  Friends Ricardo MiraFlecha and Bill Black both finished second in their categories and Kerry Librada Girona demolished the women's field with a time of 54:54 giving her a third overall/First Female, over 6 minutes ahead of the second-place woman.  Other friends Rob Marens, Enrique Mercado, and Dawn Lane (1st Female, 55-59) were there also.


Posted by Jack Finucan at 8:19 PM No comments:

Jack Finucan
I live in Orlando, Florida, having moved here from Chicago in January, 1994. I've been married for more than 42 years to Sandy, who is a wonderful wife, chef, and singer. We had 2 rabbits, Fawn and Sarah, who roamed around the house for over 12 and brought us great joy. I raced cars in the 1970s, we toured on motorcycles in the 1980s, and sailed boats in the 1990s. I was a professional photographer for 25 years in the corporate world in Chicago. I retired from Ernst & Young as the office "jack-of-all-trades" in downtown Orlando after 19 years. We have a great home close to Wekiwa Springs State Park, which is an exceptional training ground.