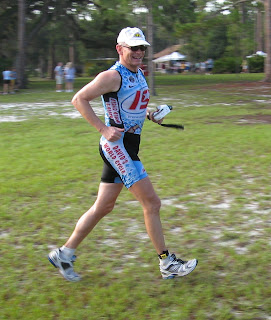 Here's an issue that triathletes have contemplated since the first (modern) triathlon back in 1974 in Mission Bay, San Diego. As triathlon has always been viewed as an endurance event, just finishing a tri was looked upon as an achievement. Since the media has portrayed tris as a grueling, heart wrenching contest (ala Julie Moss), whenever you mentioned the word "triathlon" the reaction has been "Ironman". When I began my first tris, my objective was to finish. I viewed that as an achievement, as opposed to my days of auto racing, suffering DNFs* due to a blown engine, fried clutch, and my last race, a defective radiator cap. I've never DNFed at a triathlon despite flat tires, cramps, bonking, or injuries. (*Did Not Finish)

And then I turned 50. This momentous occasion coincided with more people than ever competing and with a boom in the number of races in Florida. While I got my first trophy in 1994, 5th place in a Clermont Sprint, my first win came as a complete surprise in 2004. Now I was really excited! It didn't matter that the increase in races or my age meant that there were now fewer people in my age group. A win is a win, and a place is a place. It's made me more competitive and less complacent, made me train harder and with more planning. At the big events, I'm happy to improve my performance over previous years. With 93 tris complete, I currently have 8 Firsts, 8 Seconds, and 9 Thirds, in Sprints and Olympic distances. One of my happiest finishes in the 2009 season was my third at the Downtown Orlando Triathlon, because I beat someone I thought was unbeatable. It's also amazing to me that my times would occasionally win the next youngest age group.
I still enjoy competing and I love finishing; after the results are posted it's just icing on the cake to see my name at 1, 2, or 3.
Posted by Jack Finucan at 9:00 PM No comments: