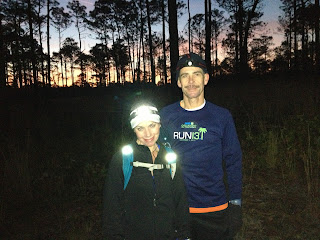 Sunday was the long awaited 50 Mile Run in Wekiwa Springs State Park.  Rick, Bernandette, and I planned this several months ago as part of Bernadette's training program for the Iron Horse 100 in Plataka in February.  Bernadette did the Croom 50 Mile Run (Brooksville) in April and Rick did the 50 Kilometer race the same day.

Even though I have kept my run training mileage high, between 15-18 miles every Saturday, I was a bit leary of signing up for the 50 Mile race at Iron Horse.  This was a great opportunity to test my fitness for ultramarathon events.

We had planned to run on Saturday but a cold front pushed through early Saturday morning with rain and thunderstorms so Sunday looked better even with the cold.  It was 38' under a clear, full moon sky when we started our run at 6:00 AM.  Even with the headlamps, we proceeded slowly at first until the sky lightened at 7:00 AM, before a spectacular sunrise appeared.  Using the Sand Lake parking lot (with restrooms) as our starting point, I had laid out a 7 mile trail loop that featured both service road and singletrack followed by a 4 mile asphalt road loop. 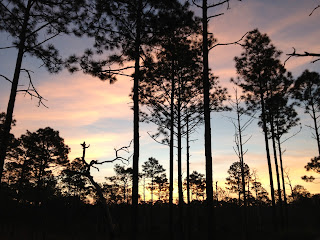 We all ran steadily throughout the day with occasional walking breaks and the miles ticked away.  We'd see deer now and then and after noon the trails began to see day-hikers out for a stroll, something extremely rare.  With the temps hovering around 55', it was comfortable in the woods running or hiking.  I started hurting a bit around mile 22 but oddly enough, it never got any worse.  I passed my previous distance mark of 26.2 miles (4 Disney Marathons) and kept going with a new goal of reaching 50 kilometers (31 miles).  Upon reaching that point, I felt good and kept going as we were into the third road loop by then.  Around mile 33, I realized that I was near my limits and eased back, arriving back in the parking lot with 35.01 miles under my belt (56.33 kilometers).  As I had started at 6:00 AM, my total time was 9 hours and 14 minutes which included food and bathroom breaks.  That would have given me a mile pace of 15:49.  My Garmin GPS, which only activates when it detects me moving, showed 35 miles over a time of 7hours and 41 minutes for a mile pace of 13:10.  The 9:14 time, though, reflect more of an actual race time but rest stops would not be so leisurely.  During an actual race, breaks are grab and go. 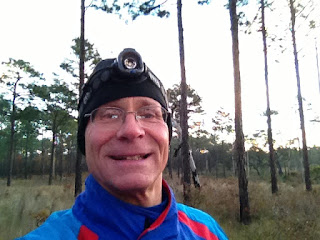 I stayed well fed during this experiment, using four 250 calorie bottles of Hammer Perpeteum, one 330 calorie bottle of Hammer Sustained Energy, 4 Hammer Gels (90 calories each), including a Espresso near the end with 50 mg of caffeine, and a Clif Builder's Bar that contained 20 g of protein along with 230 calories.  I also took Endurolytes and Anti-Fatigue caps all day.
Post event was my usual bottle of Hammer Recoverite and a light meal with lots of water.  The Garmin, which tracks not only speed and distance but also elevation changes, showed I burned 4,210 calories while consuming 1,920.

Rick and Bernadette continued on after I left with Rick finishing at mile 40 and Bernadette reaching her goal of 50 miles in the dark at 7:30 for a total time of 13.5 hours.  Her Garmin showed her 50 mile run time at 11 hours and 58 minutes resulting in a 14:10 mile split.  Well done Bern and  a great day for all. 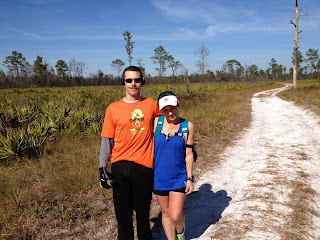 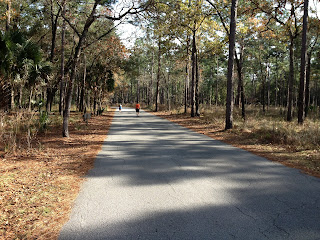 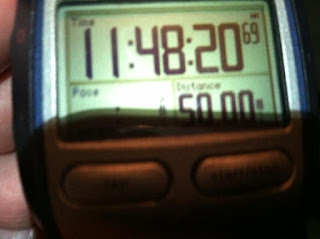