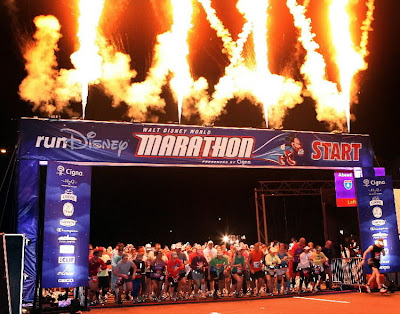 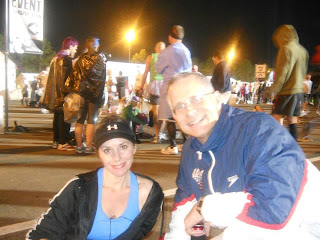 The race itself posed a few difficulties. I arrived at 2:30 AM to beat the traffic and then met Bernadette walking past the parking area from the shuttle bus zone. The morning was crystal clear, 51 degrees, with a full moon shining through the trees. The 5:30 start went off fine and B and I ran together for the first mile. Some ground fog crossed the road and the temps dropped going through the wooded areas. At about mile 20, my left leg started hurting and despite the use of Anti-fatigue caps and Tylenol it got worse. I started to take little 100 yard walk breaks through the water stops for relief. By this time the temperature was in the 60s and it was very sunny. It was really sore by mile 25 all the way to the finish. My final time of 4:38:53 had me finishing 124th out of 412 55-59 Men. The Garmin also showed I burned 3,706 calories.  A post-race assessment of my pain indicated ITBS or Ilio-Tibial Band Syndrome.  A friend told me the combination of long distance, age, and uneven pavement can bring it on.  The number of canted exit/entrance ramps the last 5-6 miles probably did it. 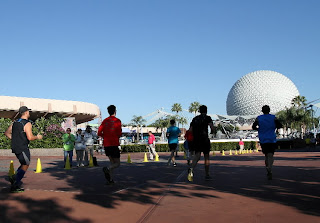 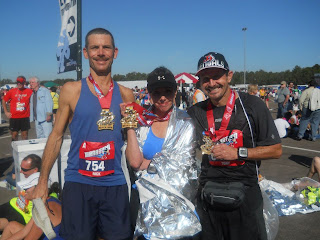 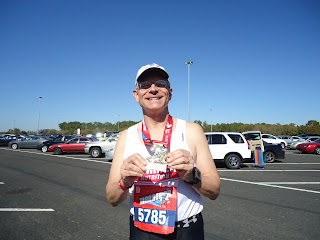 Posted by Jack Finucan at 8:43 PM No comments: