October 21st was my 3rd time at the Great Floridian Triathlon, doing the 1/3 distance.  This year's race was a repeat of the 3 loop full, which makes doing a single loop easy; .8 mile swim, 38 mile bike, 8.8 mile run.  This year was 70' at the start, very different than last year's 50s and windy.  I got there plenty early and was well rested for this race.  I did miss my training week at Longboat Key due to the office move/vacation cancellation.

Swim start was late, at 9:00 AM, due to the other distances going first.  Water temp was 77.5' so I did not wear a wetsuit (unlike many others).  Swim was fine and I was 2 minutes faster than 2016 at 36:01.  Quick exit and I jumped on the bike just as the wind was picking up.  I do wish I'd worn my thin Hammer jersey to protect my back from the sun, as I got a nice sunburn despite the sunscreen.  The 38 mile bike leg is very hilly and the wind added to the fun.  Buckhill's many climbs were a definite challenge with Sugarloaf Mountain looming ahead.  I began the big climb up Sugarloaf at mile 23 and it was quite hard.  I did manage a smile for the photographer near the top though.  Max speed off the hill was a bit slower at 39.2 as the wind was stronger by then.  I did pass 2 "big wheel" aero bikes on the way down too!  After hitting 42.7 mph going down Rocky Ridge, my right hamstring cramped climbing another hill getting back to town.  I just pedaled easy and it subsided quickly.  Got back to transition with a disappointing time of 2:23:35, six minutes slower than last year; average speed 15.3 mph.

Began the run easy and only had 1 cramp (right hamstring again) at about mile 1.  Stopped and stretched and began running with surprising ease.  Matt Mahoney caught me around mile 2.4 and I just let him go. We've been racing each other for years and he's a fast runner.  By now it was 1:00 PM and the sun was merciless with temps nearing 90.  I caught another competitor at mile 4 and passed another just before the second turnaround.  I pulled away but kept glancing back to see if he recovered but my worries were groundless.  I hit the finish line at 4:44:02 for a 5th place out of 7.  Last year I was 5th out of 13 with a 4:27:32, so I lost more time on the run.  This was the toughest race I'd done in several years but in retrospect, I did well.  This was my last race in 60-64 as I "age up" to 65-69 on January 1, 2018.


Posted by Jack Finucan at 7:57 PM No comments:

August 12 was my first time back at Clermont since my brief illness caused me to miss the July race.  It seems like the Sprint Series is more popular than ever with a lot more people each time.  Met plenty of old friends and my club, the Seminole County Triathletes had a strong showing.

Weather was perfect at the start with a light breeze from the Southeast.  Starting off in the fourth wave, I had a nice swim and jumped on the bike immediately.  Bike ride had the usual hills which I really enjoy.  The slight headwind kept my downhill speed off the big hill to 38.4 mph but was really welcome on the run.  I caught one guy on the bike and three guys on the run but one was Bill Black who races in the Clydesdale class.  I ended up 9th out of 14 with a strong finish.  James Mayer won (again) with Will Hathaway in second.  Great day! 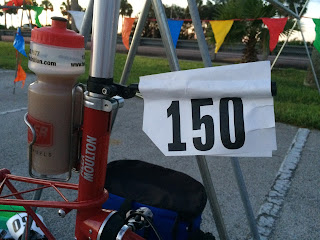 After missing what I thought would be triathlon #150 (July's Clermont Sprint Tri) due to stomach distress, I was anxious to get back in the game ASAP.  So two weeks later, I headed out to Port Orange for the Sprint Tri there.  I finished second here last year and it's a fun, low-pressure race.  The swim is in the Halifax River which is salty, the bike goes over the Dunlawton (high) bridge twice with cycling on A1A in the middle.  The run heads down the causeway onto Halifax Ave. along the river with the finish back at Panhead Pizza.
After my arrival, a lucky omen appeared in the shape of a dolphin swimming by the swim start on the causeway.  I arrived at transition right at 6:00 AM and was delighted to find that Don the race director had gotten me #150.  I got my bike racked and discovered friends Ryan and Emily were also competing along with a small group from Seminole County Triathletes.  The race started right at 7:00 as the dawn lit the skies just to the east.  The swim was a water start so it was nice to begin swimming immediately.  I was surprised to discover, with the low tide, that the water depth was only 2' deep at the turnaround buoy.
The bike leg started with the big climb up the flyover bridge followed by 6 miles south toward the lighthouse and then a return.  I had my average bicycle speed up to 18.3 mph but the final bridge climb pushed it down to 18 at the end.
Taking off on the run, we crossed under the causeway and began heading back to the mainland for the 4 mile run.  Almost immediately, I caught another runner who looked to be in my age group though no age was showing on his leg.  I passed him and settled down to the task of putting distance between us.  A few glances back showed he was still behind me.  When we reached the turnaround for the finish, I counted a 28 second gap.  However, I didn't relax until about a block from the finish line and then poured it on for a big finish.  My time of 1:25:52 was good enough for first place and a minute later the guy I was worried about crossed the line and confirmed he WAS in my age group.
Allison Gross from SCT won her age group also.  There was a great breakfast and a nice awards ceremony so that left everyone happy.

So, I've done 150 triathlons since my first in August 1993 in Chicago. No DNFs, No DQs, and no penalties.  Looking forward to continuing to compete as long as I enjoy it.  Thanks to everyone who made this possible especially my wife Sandy, who always kept me well fueled for the events.

Posted by Jack Finucan at 5:33 PM No comments:

Saturday was the Annual Tri-Y Triathlon in Ormond Beach.  Close to the Tomoka Triathlon site but this swim is in the ocean and the run is on the beach.
When I arrived at 5:30 AM, the temperature was 77' f, a good indicator of how hot this race would be.  The race director had a small problem; no one had showed up to unlock the bathrooms.  Lucky for me, I had brought my own! I got the Moulton racked as the sky began lightening over the Atlantic Ocean and began warming up before the race.  A few friends from Seminole County Triathletes were also doing the race so it was nice to see familar faces. All the competitors then headed down the beach to the swim start at 7:00 AM.  I was in the first group and we hit the waves right on time.  Ocean swims are always interesting as the swimming starts after you get through the surf to the first buoy.  The strong tidal current running to the north speeded me along but then became a factor when staying on course after the turn toward the beach.  I changed direction several times to stay online with the finish.  Exiting the water, I jumped on my bike and headed west toward the Halifax River.  Riding along the river for miles was a pleasure as the heavy foliage and trees sheltered me from the wind.  My average speed was up to 19.5 mph when I made the turn back south on Route A1A.  The pleasurable view of the ocean was spoiled by the stiff headwind I encountered all the way back; my final average was 18.6.  Racking the bike, I ran down to the beach and turned south.  There was a strong headwind I faced but it did keep me cooled down as I caught and passed one of my competitors at the 1.5 mile turnaround.  The run back was hot and got hotter as the wind was at my back the whole way.  I glanced back occasionally but never saw anyone catching me.  I hit the finish line with a 1:10:48 time for first place.  First win of the season!
I did meet a nice couple on a tandem where the stoker was vision-impaired.  The captain, Ryan Cobb, told me it was their first triathlon together.  They finished looking strong.


Posted by Jack Finucan at 9:32 PM No comments:

I always look forward to the Sprint Series in Clermont.  Four triathlons, same course, each 4 weeks apart, with plenty of parking, a lake swim, hilly bike, and flat run.  This race was the culmination of the Couch to Tri program of Seminole County Triathletes so we had 15 people doing their first tri. Upon my arrival, I met James Mayer, a longtime competitor, and after seeing Ken Junkins, we learned that Ken's knee issue was prompting his stopping running so he was doing the Aqua-bike today.
I actually got into the water for the warmup and surged at the race start.  A bit of congestion slowed me on the swim but the last leg was quick.  After taking off on the bike, I really started to pass people and had a great climb up the big hills, hitting 39.1 mph off the big one.  After several more miles on the Moulton, I shot into transition and came out running.  My running has been very strong lately and my splits were 8:20 for each mile; I passed two 60-64 competitors on the run.  I finished 7 out of 12 with a 1:14:22, a great time with the slightly longer bike course.  Being cheered by the SCT crew in the tents at the finish line always feels good!  We then began cheering all the other SCT newbies as they came in.  My friends did well: Enrique Mercado finished second in his age group, Ken Junkins won the AquaBike, and Kerry Librada Girona won Female Overall.  Great time!

Posted by Jack Finucan at 5:17 PM No comments: