This final race of my season was run alongside the Great Floridian iron-distance Triathlon by Sommer Sports in Clermont, Florida.  As we used the shorter parts of the ultra course, the distances were 1.2 mile swim, 38 mile bike, and 9 mile run, longer than Olympic but shorter than a half-Ironman.

I trained for the longer swim and the hills of Lake County in the weeks up to this event so I considered myself ready.  I decided to use the Moulton AM SPEED bicycle as I found I was a little faster on it than my Litespeed plus I was curious as to how it would do.
﻿﻿﻿﻿﻿

﻿﻿﻿
I arrived at 5:45 to 60' temps and plenty of people were already there.  In transition, I was happy to find longtime friend, Jeff Cuddeback.  The Great Floridan started at 7:30 and we followed at 8:30 for the women and 8:40 for the men.  Wetsuits were just legal with water temp of 77' and I decided to wear mine too.  I hit the water in the mass start and had a very good swim, though I felt warm near the end, finishing in 43:58.  Rushed into transition and began attacking the hills in the first mile of 38.  I knew enough to take it easy for the first 5 miles and was passed by a woman at mile 3 who called out "I see you brought your kiddie bike!".  I said "We'll see." and let her go.  The first 10 miles had some hills but it was still cool, clear, and sunny and I was enjoying the ride.  I knew Sugarloaf was waiting at mile 22.  After many more hills on CR 455, I headed towards Sugarloaf.  All the racers got an extra chip for a "Climb Sugarloaf" competition and there was a blue pad across the road at the base of the the climb and another at the summit.  I felt great as I started the climb, looking up the road to see other racers along with several people walking their bikes.  I shifted down to my lowest gear and alternated standing and spinning all the way up.  Halfway up, a line of BMW motorcycles with sidecars passed me going down the hill (Biketober fest was going in Daytona). 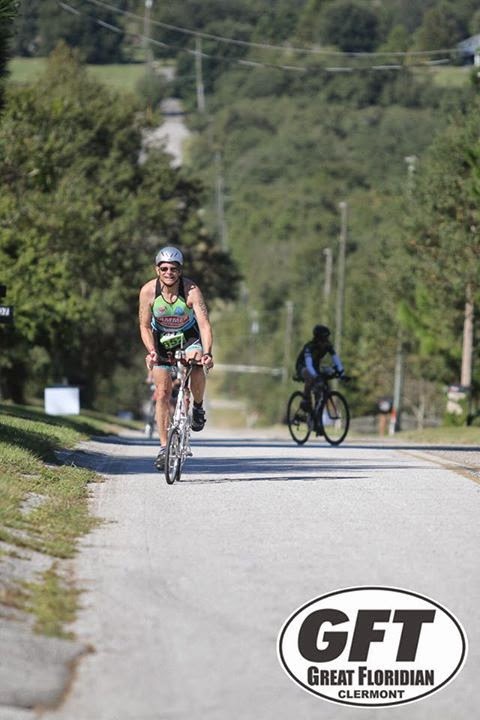 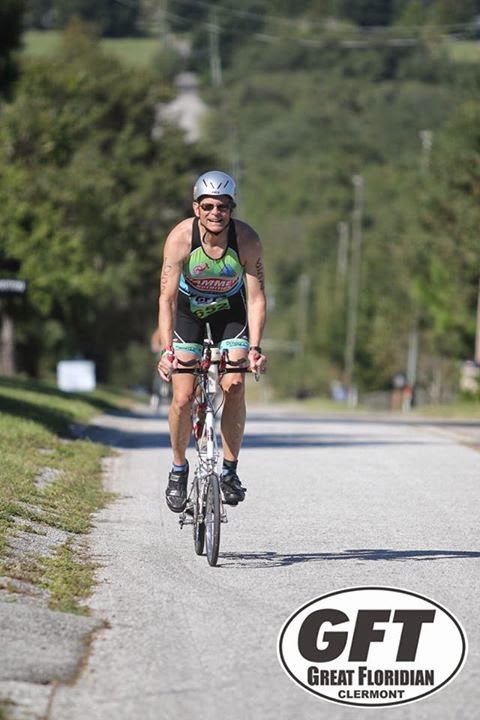 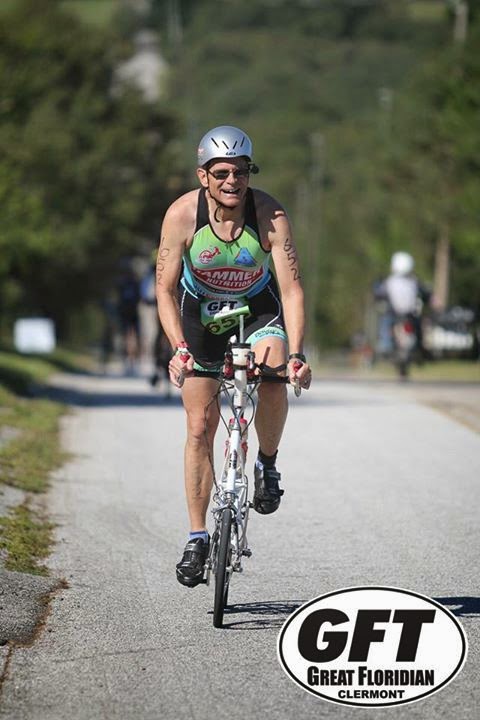 Reaching the top, I shot down the backside, reaching 42.8 mph on the downhill.  The next 16 miles had more tough hills (or was I just getting tired).  At mile 36, I passed the woman who made the kiddie bike comment and she was not happy.  I rolled in with a time of 2:19:27, the bike computer displaying an average speed of 16.4 mph.  The 9 mile run was 2 loops of an out and back bike trail course and it was hot and sunny.  With little shade, it was a tough run and I cramped briefly in the first mile.  Settling down to an steady pace, I carried on, completing the run time of 1:31:08 for a 9:47 mile split.  I crossed the finish line, at 4:45:04, good for 3rd place in my age group.  Jeff was in the overall lead when he had a flat tire at 8 miles to go and rode in on the flat.  He ran hard to get a 5th overall, 1st in his age group with a 3:22:34.  Nina Kraft, the German Ironman champion who lives in Clermont, won the women's overall with 3:31:44.  I was very happy with my choice of the Moulton bike and the suspension was welcome on the bumpy roads.  There were many positive comments made during and after the race about the bike.


I'm now unsure if I'll do any more long races as I quit enjoying myself about halfway through the run.  I've always loved Olympic distance and will try to find more next season.
Posted by Jack Finucan at 6:50 PM No comments: