My 160th triathlon did not finish the way I planned but I did finish.  This was the 28th edition of the Great Floridian Triathlon put on by Sommer Sports in Clermont, Florida.  This is an iron-distance race, broken up with each segment in 3 laps.  That way, competitors can choose the full, 2/3, or 1/3 distance.  I was doing the 1/3 for the third consecutive year.  This race inaugurated the new Victory Pointe Triathlon Park that the city of Clermont finished last month.  It’s about ½ west of the Waterfront Park, the triathlon venue that held events for decades.  Fred Sommers gave me a great number, 655; 65 years and 5 months old.  Several friends including Reeli Reenu, Amy Fedock, Ryan Ridge and Meggan Ann Johnson were also competing in the 1/3, Ryan for his first time.
I arrived at 5:30 since I wasn’t sure about the parking and setup at a new course.  Everything was very well laid out and I got my bike racked quickly.  The little Moulton caused a stir when a number of racers from Miami were fascinated by it sitting among all the big wheels.  One guy even brought friends from another rack over to see it.  I was grateful when my friend Tim Delaney, piped up from down the row, “Don’t worry, he’s plenty fast on it”.
Our usual Florida fall cooldown had not happened yet and the early morning temps were in the mid-70 with sunny skies and a hot day predicted.  Since the 1/3 group went last, we started at 9:00 AM, the idea being that the full and 2/3 people all exit the water roughly together.  The .8-mile swim was great with the water at 82 degrees and with the sun getting high made it rather fun.  Heading out on the bike was a new adventure as the new location also meant a new course.
The 42-mile bike course started out by rounding Lake Minneola away from the swim start and the first climb began about mile 7.  Then the fun began.  Lake County is bisected by the Lake Wales Ridge and many of the roads near Clermont have steep, rolling hills around them.  All during the bike ride if I wasn’t climbing I was descending, usually around 30+ mph.  We rode through scenic Monteverde and hilly Ferndale and then Buckhill Road.  I was feeling great with plenty of nutrition and hydration aboard.  However, it was now past 11:00 AM and getting very hot.  I had passed dozens of other riders during the climbs as the Moulton and I were performing well.  Mile 30 brought Sugarloaf Mountain into view and I made sure I was well fueled and hydrated before starting.  The climb up is a very tough 14% especially after Buckhill’s multiple 11% rollers so I just put my head down and climbed in my lowest gear, passing other cyclists walking their way up.  Chasing two other cyclists down the backside brought me to 39.4 mph as I rounded the tight, left hand turn at the bottom.  As I headed onto the remaining hills, I felt the heat for the first time.  Maybe I really got hot climbing Sugarloaf but the bike computer showed 96’ f in the noonday sun.  Going back to Clermont put me on a wide open 6 lane highway and the pavement radiated heat.  The computer showed 98’ and then flickered several times at 103’ and 104’.  My left calf was getting tight and my inner right leg hurt briefly during another climbing.  Coming off another hill on Rocky Ridge Road, I hit 41.7 going into a left hand, sweeping curve.  Very exciting but the wind was not cooling me down.  I averaged 15.6 on the bike course.
Racking the bike, I changed my shoes, grabbed my hat, number, and hydration belt and headed out on the nine mile run.  I was taken by the fact that almost no other racers were around.  The heat was tremendous and it was evident this was going to be a survival run.  I had my white sun sleeves on and my ice bandana around my neck.  My run/walk was agile enough to occasionally pass people but it was evident that we were all suffering.  I was drinking plenty and dosing myself with ice water but the hot sun was relentless along the lakeshore.  My calf stayed tight for the entire run but didn’t hurt any worse and nobody passed me the whole 9 miles.  I rolled into the finish in downtown Clermont, grateful that my race was over.  While my time was slow compared to previous years, I was only 18 minutes behind first so I garnered second place for my efforts with a time of 5:29:10.  Third was 1:29:15 behind me so I know he was having a terrible time.  This was truly an epic day and I was happy to do so well.  Reeli (3rd) , Amy (4th) and Meggan (6th) all finished well but Ryan came in with a 8:03:00 in a race that was sheer guts; I would have quit!  Thanks to the race organizers and volunteers for a great event.

Saturday was the fourth and final race in the Clermont Sprint Series.  Today was a bright, sunny day with no wind and a water temp of 82'f.  A lot of friends from Seminole County Triathletes were there along with new friend Ryan Ridge, doing his second triathlon.
I was in the third wave and had a great swim in the calm waters of Lake Minneola, finishing with a time of 9:58.  My bike ride on the Moulton SST was exceptional, with a top speed off Bloxam hill of 39.3 mph, and an average speed of 18.1 mph.  This was probably my best ride at Clermont yet, due to a seat adjustment after the last race.  Taking off on the run I felt great and completed the run in 27:58, crossing the line in fourth place out of nine with a time of 1:18:39.  This was my second fastest time in the series.  After the race had ended, I checked the results online and discover that in the final tabulation of series point, I had won the Championship.  My solid finishes in all 4 races had acquired more points than anyone else.  Trophy and $50 gift card!

Posted by Jack Finucan at 11:53 AM No comments:

Finished second today out of six in my 158th triathlon; averaged 17.6 mph on the bike course and hit 38.9 coming off the big hill. Great run as the overcast moved in but I stayed in second place for the whole race.  Been 2 years since I got a podium in Clermont; if only that guy from Jacksonville had stayed home.

New friend Ryan Ridge did his first tri today; he has lost 50 pounds since January with more to go. Fred Sommer very kindly gave me a number in the wrong rack to be next to Ryan.  I've been giving Ryan advice and he hired Jeff Cuddeback to coach him. Ryan finished alongside his friend Michelle, doing her first triathlon also.

Lots of Seminole County Triathletes here today too. Meggan Ann Johnson finished a fast third (passing me on the bike again!) in 35-39 Female.  I usually catch her on the run but she finished a minute ahead.  Kenyon and Tamara Congdon was there with his family too. 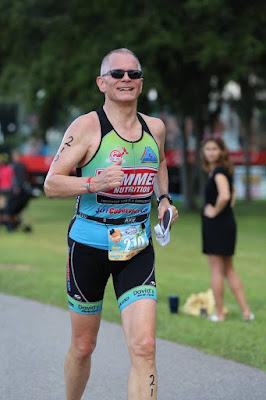 Posted by Jack Finucan at 10:49 AM No comments:

Triathlon #157 today: Port Orange Triathlon just south of Daytona on the Halifax River. You know it's going to be a great race when you see dolphins on the swim course before the start!

Sprint tri with a twist; 4 mile run instead of the usual 3. Brought the AM Esprit that arrived from the UK two weeks ago. In water start, swimming into the sunrise. Really enjoyed the swim. Bike leg begins with a nice climb over the intracoastal bridge. Then 5 miles south and returning on A1A back over the bridge again. For the run, we head west on the causeway then turn south and run along the river for 3+ miles. In my age group, I was fastest on the swim but got caught on the bike to start my run in second place. Eventual winner John Anderson can run a bit faster than me so I finished about 2 minutes behind him but a minute ahead of third place.

The Esprit was a touch slower than the SST I raced on last year so it may need a bit more sorting. Really needs new gearing as it's set up for steep climbing. I was topped out in the 50 x 9 ratio a lot. Photographers got some nice photos. Had a great day!


Posted by Jack Finucan at 8:24 PM No comments:

This Saturday was the second sprint tri at Clermont this year.  James Mayer was there again so I had a big challenge to overcome.  Lots of friends there so I really enjoyed it.  Had an ingrown toenail that worried me for days before but was not an issue in the race.
Water temp was 84' f so no chill when you started.  Very good swim and felt strong throughout.  My bike was a bit hard in the beginning since it takes me 5-6 mile to warm up.  Hit the hills at mile 7 and peaked at 39.2 mph on the way down.  I flew up the next hill passing lots of people.  I finally peeked at the computer of the way down the long hill and I was blasting along at 35-37 mph for a mile!  Felt great heading out on the run and after passing one guy on the bike, I passed two more on the run, finishing in 4th place (out of 11) with James taking the win.  Kerry Girona won Female overall and Kelly Burwash Collins got third Female at age 50!  Great time watching friends finish too.

Posted by Jack Finucan at 8:39 PM No comments: