Today was the 4th Annual BelieveStrong Moss Park Olympic-distance Triathlon in Orlando.  The field was small today and from now on all the Epic races will have the Sprint and Olympic on the same day.  One cool incident at the start was the announcer couldn't get the Star Spangled Banner to play so one of the competitors sang it acapella; she was great! 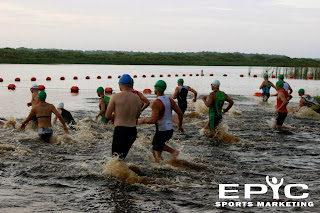 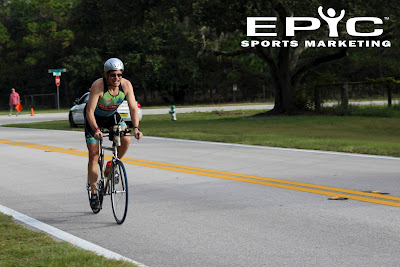 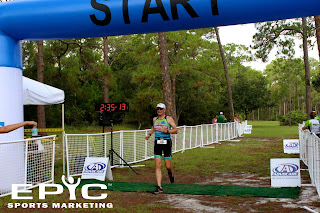 My longtime rival, Bill Floyd from Tampa, was there and he beat me by 4 + minutes as my finishing time was 2:35:13.  We were the only men in 60-64, so I got second.  I had a great race, feeling strong throughout.
﻿
At the same time in Winter Park was the Celebration of Running 5 K and my friend Kevin Casey (see photo from last race) had his whole family run with him including 5 year old Kyle.  The picture below shows Kyle with his mother Linda and sister Rachael in the background.  He finished the race and had a great time!

Posted by Jack Finucan at 8:03 PM No comments:

Thursday, August 8th, was the 20th Anniversary of my first triathlon, way back in Chicago.  This Saturday was the 3rd in the new expanded Clermont Sprint Tri Series.  Kevin Casey, a co-worker I've been guiding through the world of triathlon, made this his 2nd race ever, as well as his first hilly event.  I surprised him by showing up too.  His wife, Linda, and their 3 children came out to.  Longtime competitor and friend Ken Junkins was there too, albeit at 59, he was 1 year and 1 age group behind me.
﻿


﻿The weather was warm and clear at the start, with quite a big field (347!) participating.
Kevin was in the 3rd wave and I was in the 5th.  Lake Minneola was flat and warm and we both exited the water together.  I lost sight of him after that and began the hilly bicycle portion.  The hills did not disapoint as I crawled up some and hit 38mph on the biggest going down.  The run leg through town has some nice hills too and I kept feeling better and the last mile felt like I was flying.  I never saw anyone else in my age group so I was surprised to find that I placed 1st out of 7, my 21st win, with a time of 1:19:11.
I wore my Central Florida Tri Club kit so I posed for pictures with the other members who placed,  Kelly, Karen, and Luis.
﻿

Posted by Jack Finucan at 3:29 PM No comments: