Today was the 8th Annual Baldwin Park Triathlon.  Held in Baldwin Park, the former U.S. Navy base near downtown Orlando, I've done this race every year since it's beginning.  This morning was clear and 70', perfect for an short urban race.  Besides the close-by location, it's known for the hydrilla (weeds)  in your face during the swim and the five lap bike course, reduced to four for 2012.  One change that was welcomed on the bike was allowing the first wave elites to almost complete their bike laps, eliminating the high speed passes that occured earlier years.  Somehow, I ended up with race number #59, which is my current age.

I saw a number of familar faces there including David and Yvette Sanborn, owners of David's World Cycle. 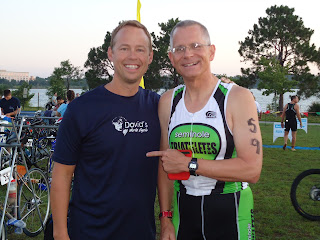 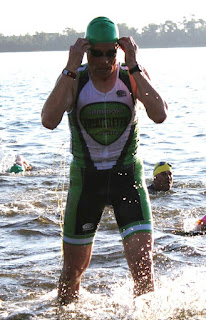 After my week's vacation with lots of intense training, I felt primed for this race.  I had a great swim followed by a quick transition to the bike.

I averaged 21 mph for the bike leg and had another fast transition to the run.  I felt great coming off the bike so I pushed hard for the entire run.  I was amazed to see my mile splits were 6:56 per mile for the short 2.8 mile run.  My final time of 1:07:28 was good enough for a first place in 55-59.  I have now won this race 4 times and finished 2nd twice; I'll do this race again next year (when I turn 60).
I did meet Donna and George, some new residents to Orlando, transplanted from San Diego, the birthplace of triathlon.  Here's a photo of them with Kurt, who moved back to Orlando from California. 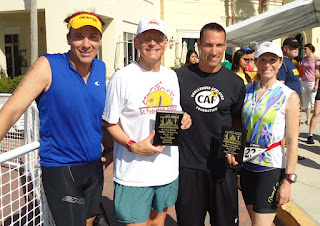 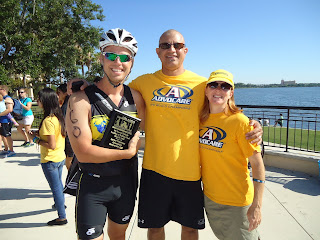 David Sanborn won the Corporate Challenge and I grabbed a photo of him with Z and Kim Buttar, the race directors.

While I was doing this race, Lance Armstrong won the Florida Half Ironman in Haines City, just southwest of Disney World!  His bike split for the 56 miles was 2:02 and half-marathon time was 1:15!  Very fast! 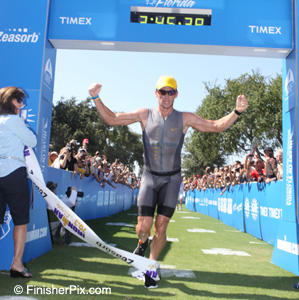 Posted by Jack Finucan at 1:12 PM No comments:

Today was my first tri of 2012 and my 11th time at St. Anthony's since my first in 1995.  Much has changed through the years.  When I first competed in 1995, there were 1,500 triathletes; now the race is capped at 4,000.  We stayed at Dickens House Bed & Breakfast on 8th Street, just a few blocks from the Start/Finish, Expo, and the Transition Area.  Very nice place (though a bit pricey) and Ed is a great host.  We arrived on Friday afternoon to be able to go to the St. Pete Maddog's party in the evening. 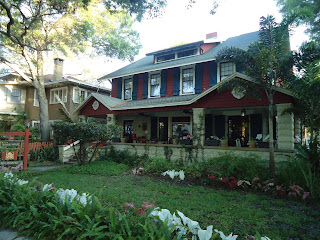 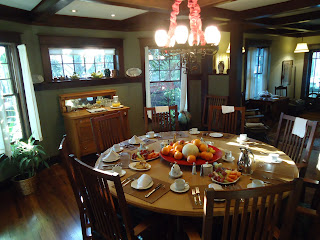 We had a great time at the party and met a nice tri-couple, Jack & Tina.  Also, 18 Pro-triathletes from around the world were there, talking to everyone.  The Maddogs offer homestays to all the pros which is a great way to share your love of the sport. 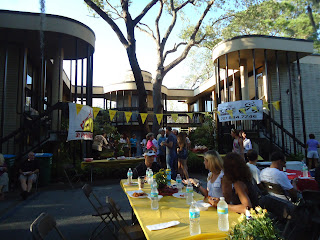 Saturday morning, I went over to watch the Meek & Mighty Mini-tri at the North Shore Pool a block away.  The race consists of 10 laps of the pool, a 2 mile bike, and a 1 mile run.  Very inspiring seeing all the children competing along with a number of adults.  Some of the kids had expensive bikes; our future pro's.  In the afternoon, we went to Clearwater to eat at Columbia's on the bay and then I put my bike in transition.  Close by the Expo was the first portable wind tunnel; really cool!  You could rent time in it to improve your speed. 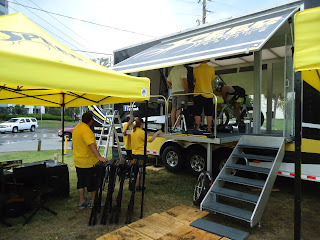 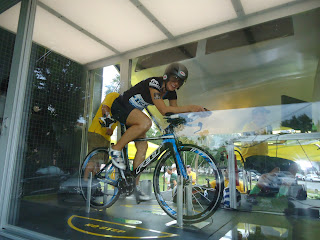 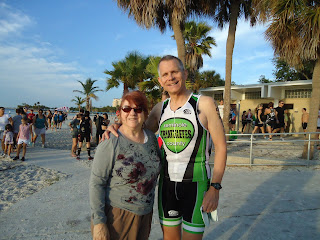 Sunday morning I arose at 4:45 and went down to transition to get body marked, lay out my gear, and look at the water.  While wetsuits were legal with a temp of 76.4', there was a debate by guests at Dickens House if they were really necessary.  I thought about it and half an hour before my wave start, I decided to wear mine, a decision I regretted a few minutes later.  As I was struggling pulling it on, despite liberal applications of Suit Juice, I felt a sharp pain in my lower back.  I discovered I couldn't bend over without more pain.  I could stand and walk though, so Sandy and I headed toward the beach start.  The gun went off at 7:45 and I began swimming the 1.5K/.9 mile course, surprisingly free of pain.  This is a new swim course for 2012 and the first half was great, then we turned left out into Tampa Bay.  It got quite choppy quickly but not really rough and I finished the swim in 36:51, not bad considering.  I climbed up the stairs (ow, ow, ow) and headed towards my bike. 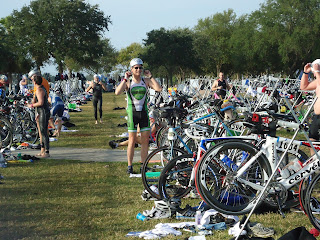 It hurt a lot to put on my shoes and climb on the bike but once I settled in the aero position (after the cobblestones), I was fine.  The 40K/24 mile bike course stretched out in front of me and I began a very steady effort of chasing riders down from previous waves.  The course was crowded in spots but having a target ahead always spurs me on.  I rolled into transition at 1:14:05 with an average speed of 20.1 mph; the 2nd fastest bike split in my 11 times here.  Leaving transition for the 10K/6.2 mile run, I quickly settled into an easy warm-up pace, happy there was no pain while running.  The run course is always fun, with lots of spectators and great vistas along the waterfront.  Crossing the little bridge to Snell Island always means the warm-up is over and I began concentrating at reeling people in.  I passed a lot of people and got passed a few times too.  After the turn-around, I saw a friend, Kent Richardson from the Bahamas, behind me.  Then at the mile 4 waterstop I caught up with Sister Madonna Buder (82 years young), who started several waves ahead of me.  Sandy and I had met "The Iron Nun" years before at a Maddog party and I had given Sandy her book, "The Grace to Race" for Christmas.  We chatted briefly and then I pulled ahead.  Near the finish, I saw a series of signs on the left side of the road, laid out as a poem expressing a marriage proposal (it turned out to be a song lyric).  After the race I found it is was from one Seminole County Triathlete to another; Walter Choroco proposed marriage to Tracey Stein at the finish line and she accepted.  You can watch the cool video here: http://vimeo.com/41381290 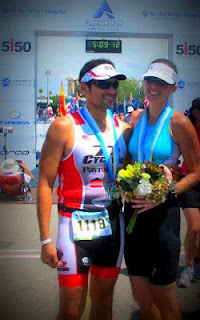 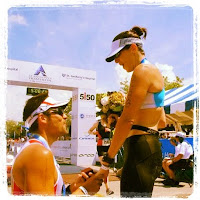 I finished the 10K run (56:28 with 9:05 mile splits) and crossed the finish line at 2:53:09, my 3rd fastest time at St. Anthony's. Sandy met me there after chasing me around all morning and a few minutes later Sister Madonna crossed the line too. Sandy got her to autograph her book and we chatted a bit before heading over to the food tent. I finished 38th out of 83 in my age group; happy my injury didn't slow me down much. 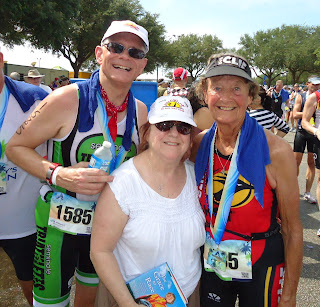 Posted by Jack Finucan at 10:02 PM No comments: