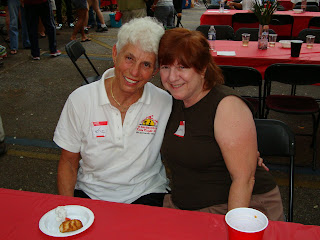 Pre-Race: This weekend is my first tri of 2010; I had planned on doing two tris before this but Florida's frigid winter kept water temps very low even into April. Wetsuits are helpful but 56' is still pretty cold water. I've done St. Anthony's 9 times before, starting in 1995, but have not been back since the 2005 race. It's grown now to 4,000 triathletes, so it should be a major show. My wave is 25 out of 32, starting almost 2 hours after the pro's. Also it's fun to join the club Sandy & I both belong to, the St. Pete Maddogs, who throw a great party Friday night. The club does homestays for all the pro's so you get to meet some famous people at the party. Sandy got a chance to talk with Katie Knight-Perry, one of the first Maddogs. Saturday morning's mini-tri, The Meek & The Mighty, features children and adults competing together around downtown St. Petersburg and is great fun to watch. We did manage to get into a B&B, the Sunset Bay Inn, within walking distance of everything, which makes the congestion easy to deal with. We had a great breakfast Saturday morning after I had a short bike ride. 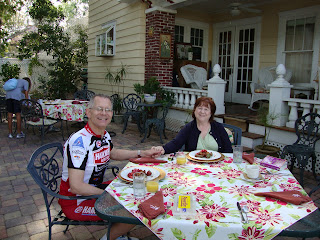 Race Report: We had a great weekend and I had a great race. One of the issues with big races like this is the fact that it takes a huge effort to organize and work out the logistics to have 4,000 triathletes race at the same time. I got up at 4:30 AM and walked the 3 blocks over to transition. Once I had set everything up (bike was racked on Saturday), I walked back to Sunset Bay and relaxed until 8:00. Sandy & I then walked the mile to the start at Spa Beach and waited for the 8:39 start for Wave 25. 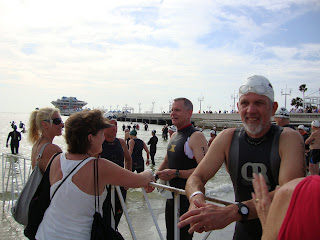 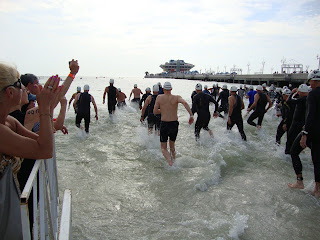 The wind, which had been blowing since sunrise, began picking up along with the waves and the race director decided to shorten the 1.5K swim to 1K, which delayed the race 36 minutes. They were already pulling swimmers from previous waves out of the water. Finally the gun went off and we began. It wasn't too bad and I finished the swim in 18:51. A long run through transition (it looked like 10 acres of bike racks) and I was off on the bike. 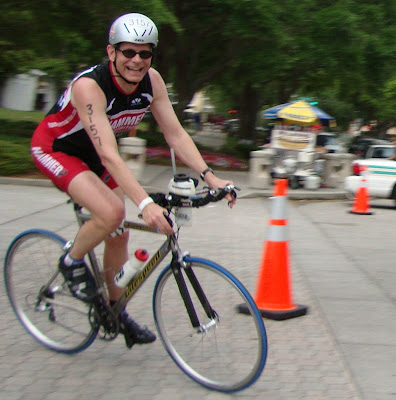 Great picture, Sandy!
By now, the wind was blowing 15-20 from the south with higher gusts. By mile 5, my AVS was only 16.4 MPH! As you rounded a corner, you'd get hit with a big headwind that slowed you immediately. At mile 10 I felt I was getting into a good rhythm but everything clicked at mile 17 and I was really cranking with a strong tailwind. My speed jumped to 25-29 MPH and as I headed into transition, my AVS was up to 19.7 for the 25 miles! I drank 2 bottles of Perpeteum during the 1:15 minutes bike ride so I was well hydrated & fueled.
As I ran out of transition, I swallowed 2 Endurolite capsules in case of cramping. Sure enough, at 1/2 mile the first hamstring cramp hit; I slowed and stretched and at the 1 mile waterstop I had 2 more capsules and continued on. My speed kept increasing and after a Hammer Gel at Mile 4, I was flying. I finished the 10K with a time of 58:23 (9:18 mile) which was slow as I lost about 2-3 minutes with the cramp. My final time was 2:39:47, which was skewed from my previous times by the shortened swim. One nice thing on the run was the overcast and the wind, which was really blowing by now. I finished 35th out of 100 competitors in the 55-59 Male age group, so I was very happy. 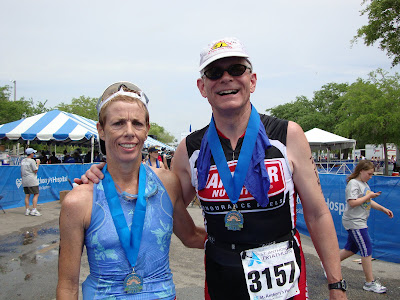 Here's the finish with Celine from Ireland by way of the Cayman Islands. We spent most of the bike and run leg within sight of each other. Great race!
Posted by Jack Finucan at 9:36 PM 1 comment: