Sunday, January 26 was the inaugural Town of Celebration Marathon and Half Marathon in Celebration, Florida, known as the "Disney Town".  Conceived of 20 years ago by the Disney Corporation as a New Urban community, this was their first ever Marathon and Half run at this location.  This was held as a charity event for the local schools.  I signed up for the marathon, which would be my 5th in 10 years, and friends Kevin Casey (half) and Ashlee Curran (full) signed up too.

The race morning revealed perfect weather for us, 55 at the start, 65 for the finish, with a light overcast through much of the event.  With a total of 2,200 competitors, this was definitely a lower key event than Walt Disney World's 25,000 two weeks earlier.  With such a small field, I started the clock only 50 seconds after the gun.  The marathon was a 2 loop course, which wound through the town and the greenbelt areas that are interspaced in the community. The course was relatively flat with some long straightaways and some twisty parks in the neighborhoods.  There were also 2 areas where we ran on boardwalks through wetlands.  The volunteers were very vocal in their support and it was great to run through a town where many residents called out encouragement from curbside and their front porches.  Little girls cheering in oversized pajamas were especially cute.  I felt strong throughout the run (fueled by Hammer Nutrition!) and paced myself well. My goal was to PR at 4:30 and discovered at the first bathroom break that I had forgotten to disable the Autopause feature on my Garmin, so it paused everytime I did.  I kept guessing at my times based on the few race clocks on the course and just trusted on my luck.

After the split at Mile 12, the 2nd lap course got very quiet as the majority (75%) were doing the half.  Something interesting happened then; with a solitary run, I began getting into the zone.  I was running along steadily and evenly and felt very focused.  After mile 15, I was looking at my GPS every 10 minutes and watching the miles click by.  I never felt so smooth and confident before in a long race.  I began reeling runners in, one at a time, and nobody passed me again. My strategy of sticking with descending mile splits was working fine.  I caught the 4:30 pacers at mile 20 and stayed with them until 24 when I picked up the pace and finished with a 4:29:21 for a new PR by 2:47.  My Garmin showed 4:20:56, so I lost over 8 minutes on bathroom breaks and water stops.  The correct chip time gave me a mile split of 10:17; my Garmin also showed I ran 26.46 miles which meant the course was measured a true 26.2 mile marathon distance.  In addition, it displayed a caloric burn of 3,693 calories!  I took in about 1500 calories, Hammer Perpeteum and Hammer Gels, during the race.  Kevin set a PR for the half with a 2:28 but unfortunately Ashlee had stomach issues at mile 16 and had to drop out.  Better luck next time Ashlee.

There were 1,575 finishers for the Half and 506 for the Full, a trend seen as of late as half-marathons have taken off in popularity.  This race was very well run for a first time event and I'm looking forward to next year's Celebration Marathon.  Nice medal too. 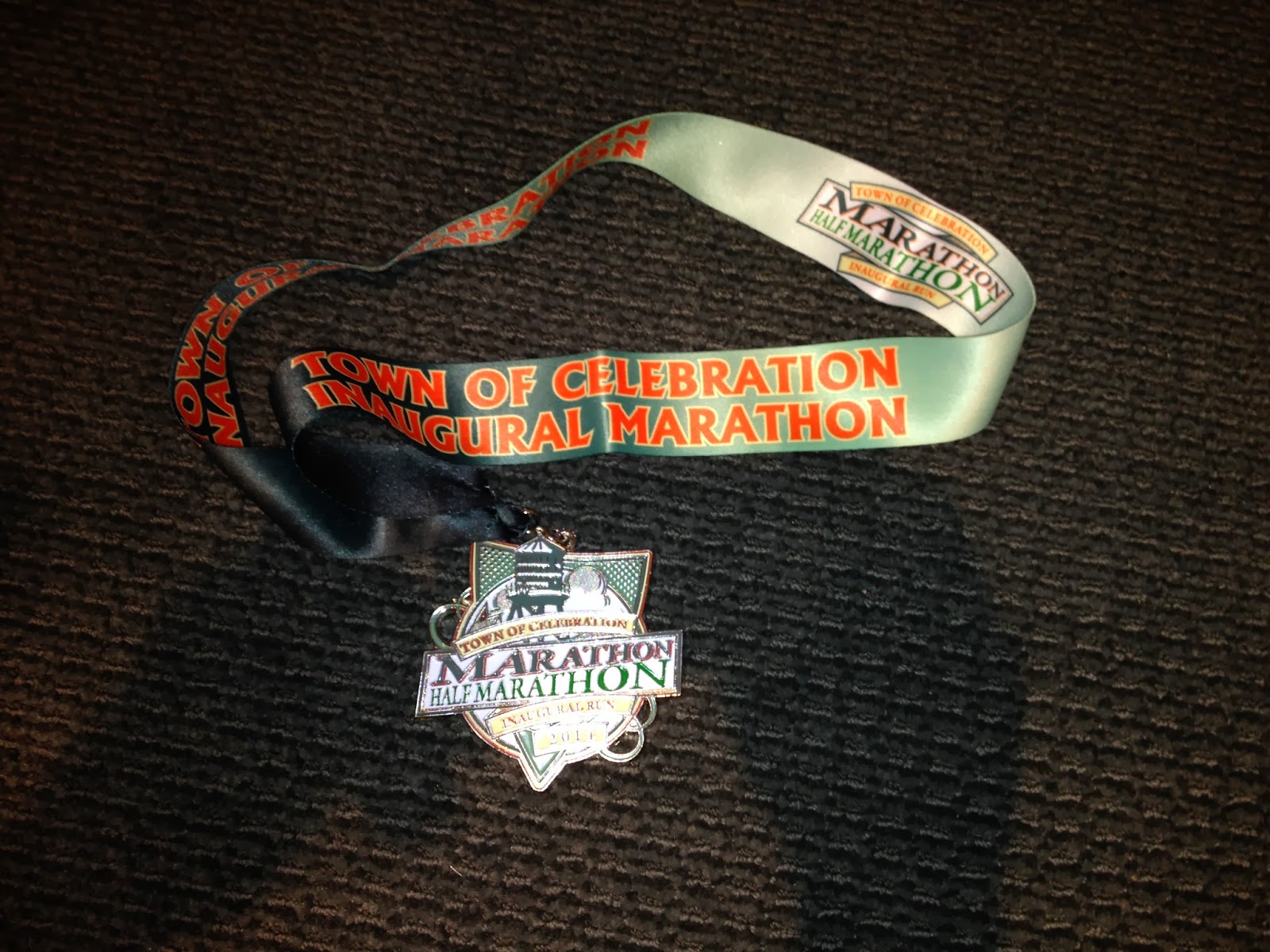 Posted by Jack Finucan at 6:44 AM No comments: