My 140th triathlon today at Ormond Beach, Florida. Race director gave me #140 too!

Overcast sky over the Atlantic for the start of what looked like a calm ocean swim. Getting past the first break, the waves got bigger and after diving through two, the next one smacked so hard it knocked my goggles loose.  Then the chop picked up and about 100 yards out a jellyfish wrapped around my arm which made it more challenging. Never been stung before but pinpricks pain is a good description. Swim time was slow at 24:27 and everyone thought it was long.

My bike leg on the Moulton was great; 19.8 mph average in a flat rectangle course down Granada to John Anderson Dr. and over to A1A along the shoreline. The run was an out and back on the beach for 3.1 miles.  I caught 2nd place on the run at the mid-point and poured it on to pull away. First place finish with a nice hat trophy! Sandy joined me too but our beach day ended when the storm pushed ashore as the last racers were finishing. Jellyfish sting subsided and just looked ugly. Great race and my first win in a while. 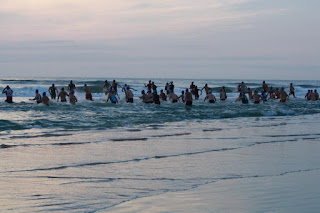 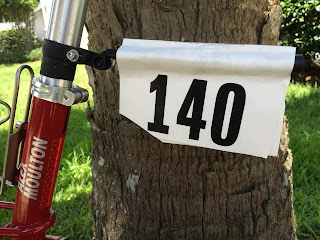 Posted by Jack Finucan at 7:04 PM No comments:

I headed out to Moss Park this morning to do my first Olympic distance tri in over a year.  I was quite excited and having raced this course many times over the years, I was anxious to compare those races to my current level of fitness.  Set up was quick and I ran into several friends like Bill Floyd and (unfortunately) Will Hathaway.  The swim went off as the sun rose over Lake Mary Jane and after two laps I exited the water at 31:13.  The long run to transition adds a bit of time but I headed out on the Moulton for the flat and fast 22.6 mile course.  The two laps took me 1:11:10 for an average speed of 19.2 mph.  Heading out on the run brought out a bit of heat as it was now 88'f.  The run twists through the park and the campgrounds so you do get a bit of shade but as I flirted with 8 minute miles, I managed to finish at 47:11 for a total time of 2:34:52.  This time and the splits were in the middle of my performances there so I was pleased.  I finished in second behind Will Hathaway as his swim and bike splits were faster than mine.  I was 5 minutes fast than him on the run but couldn't beat his lead. My friend and running legend Heather Schulz won the Women's Duathlon overall; there is no stopping her.

Posted by Jack Finucan at 5:17 PM No comments:

I was looking forward to Saturday's triathlon in Clermont for 2 reasons; first it was the first real test of the new Moulton SST bicycle and I against a course I had completed 4 times last year on the AM SPEED and secondly, it was the Seminole County Triathlete's goal race for the Couch2SprintTri program.  Leaving the house at 4:30 AM, I got there plenty early and was one of the first up to registration.  Racking my bike, I met a new competitor in my Age Group, Robert Broeckett, AKA Brockett the Rocket.  Running into Ken Junkins a few minutes later, I shocked him by mentioning that Brockett was here.  He said that the Clermont Series are by far the most competitive races he competes in.  With the usual Ken Junkins/James Mayer/James Best/Will Hathaway quartet to battle with, I was now looking at another very fast 60+ Male.  Last year I was 4th out of 20 for the first race and I wondered what the day would bring.  Kevin Casey arrived to spectate and I was fortunate to have him get some good pix of me.

The bright morning had me starting in the 3rd wave and I had a great swim.  Transition went quickly and I surged out on the Moulton.  The bike performed beautifully and I hit an average speed of 19.2 before the big climbs started.  Reaching the crest of the big hill at mile 5.5, I sped down reaching a top speed of 38 mph.  That's followed by a sharp climb where I dropped to 8!  With a final average speed of 18.6 (course PR), I took off on the run.  I felt great and began reeling people in.  I managed to pass 2 men in my age group and really pushed into the finish.  Good thing, as another guy was 7 seconds behind me.  I hit the line with a time of 1:12:11, achieving a new PR by over 2 minutes.

My finish was good for 7th place out of 15.  Ken Junkins beat Brockett by 1 minute and 11 seconds with a 1:03:21 for the win.  James Mayer was 19 seconds back for third.  I was amused that despite my previous 4th place, my 2+ minute faster time only garnered me 7th place today.  The new SST performed extremely well and I'm very happy with the bike (Thank you Diane Blake!)
Heading over the the Seminole County Triathletes tents, we all gathered to cheer on our friends and especially all the first timers that were out on the course.  Small groups began running in with members, cheering them along into the finish.  The coaches passed out prizes to all the newbies (no more) and the newbies presented the coaches with some gifts.  Under Billy Price's leadership, this club gets stronger every year. 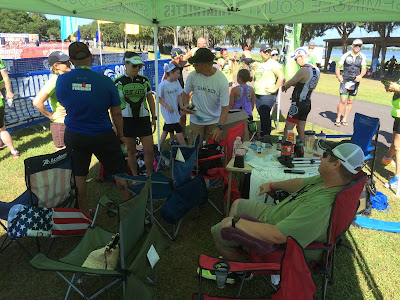 Posted by Jack Finucan at 8:40 PM No comments: