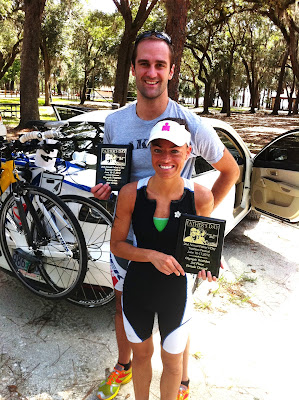 Today was the first of the summer Olympic-distance tri's out at Moss Park, just southeast of Orlando Airport.  The day promised to be perfect after a week of heavy rains.  A co-worker at Ernst & Young, Chris Louthan and his girlfriend, Amy Bailey, joined me for their first triathlon at Moss Park.  Epic Sports' more casual approach is a welcome change after the congestion at St. Anthony's.  I arrived at 6:00 AM just as the sun was beginning to show itself.  Setting up in transition was a snap and I headed down to the water to warm up.  Chris was in the first wave, I was in the second, and Amy started in the third.  Amy blew by both Chris and I on the swim with a blistering 22:06  for the 1.5 kilometers.  Next, on the 2 loop bike course, I managed to average a respectable 20.1 mph over the 40K distance.  It was starting to get warm at the run start but I was able to post a 46:39 for the 5.6 miles, translated into 8:19 mile splits.  Thanks for the shade on the run!  My final time was 2:30:23, good for 2nd out of the 5 in my Age-Group.  Chris, however, vanquished the 25-29 competitors with a 2:16:11 and Amy (Awesome Amy!) finished 3rd Female Overall with a very quick 2:12:22!  Chris informed me afterwards that "I've been chicked" is an expression used when your girlfriend beats you in a race.  A great day for all.
Posted by Jack Finucan at 4:19 PM 1 comment: