The 11-28 Experiment on Sugarloaf Mountain

For several years, the hills have gotten a little higher and harder and as I want to continue riding as long as possible, I needed some help.  While my Trek 1500 road bike, the Burley tandem,  and the Softride 360 hybrid bikes all have triple chainrings, the bike I ride the most (and the farthest), the Litespeed Tachyon tri-bike, has a double.  When I built the bike, I had the foresight to swap the stock crank to a FSA compact crank.  I felt the change from 52 and 39 chainrings to the compact 50 and 34 would definitely help my climbing.  While the bike has a 10 speed cassette, I was using the original 12-25.  Shimano offers an 11-28 and I finally purchased one last month and Phil at David's World swapped it out.  Shimano also makes a 12-30 but it requires a new long-cage derailleur. 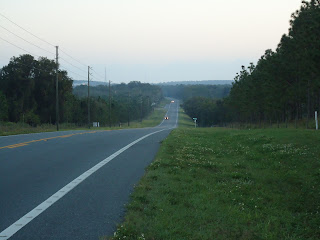 I rode several times with the new gearing and liked the wider range of gears but the real test would come out in Lake County.  I passed on doing the Great Floridian Intemediate Tri last Saturday (which was combined with the Great Floridian Ultra Tri the same day).  So today, I decided ride the 39 mile bike leg starting in Clermont.  To simulate race conditions, I ran 17.4 offroad in Wekiwa Springs with Bernadette on Saturday, then washed and waxed both cars to boot.  This meant I was not the freshest when I arose at 5:00 on Sunday morning.  Plus, Hurricane Sandy was stirring up the Atlantic Ocean about 100 miles offshore, pulling winds across the Florida penisula at 15 to 20 mph. 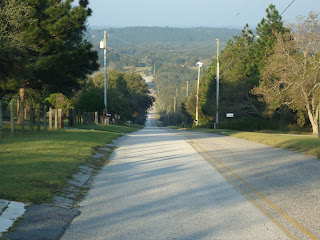 Sugarloaf Mountain, at 345' above sea level, is the highest point in penisular Florida.  It climbs about 274' from the base to the top.  On a clear day, you can see the Atlantic Ocean and the Gulf of Mexico from the summit.  The picture above is near the top looking back down the road. 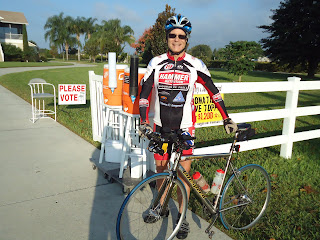 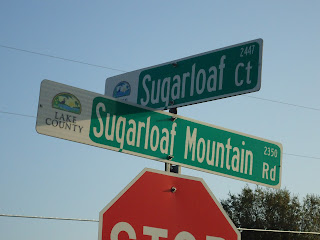 Arriving in Clermont at 6:30 AM, it was still dark and conditions were a bit fresh, with a stiff wind blowing across the swim course at Lake Minneola.  I headed out and as dawn broke I got lost for the first time at mile 6.  The bike course map I had to guide me did not have all the streets marked and I missed a turn at Cherry Lake Road.  However, I hit State Route 19 and headed north, eventually passing Cherry Lake Road.  There were plenty of hills but my real goal was to climb Sugarloaf Mountain, which is famous for it's steep grade uphill.  I reached the base at mile 23 and began the climb.  It's deceptive as it doesn't look steep from the bottom; the fooler is that it gets steeper as you climb.  I stood for a bit but quickly shifted down and began pedaling in my new super low 34 x 28 combo.  My speed dropped to 6.1 mph which I held for a while, dropping to 5.9 for a few seconds.  I kept on cranking though and made it to the top without stopping or walking which is a first for all the times I've climbed it!  I stopped to chat with a few cyclists at the water stop provided by the Fenstads  at their home at the top.  My downhill speed peaked at 39.7 mph coming off the mountain and I headed home, happy that my experiment had worked out fine.
Posted by Jack Finucan at 5:59 PM No comments:

My friend Mike O'Leary did his first 5 Mile run this morning at the U Can Finish (UCF) 5 Mile Run at the University of Central Florida in Orlando.  Mike first saw me run a 10K in Dublin, Ireland, four years ago and that inspired him to begin running.  Click on a pic to enlarge it. 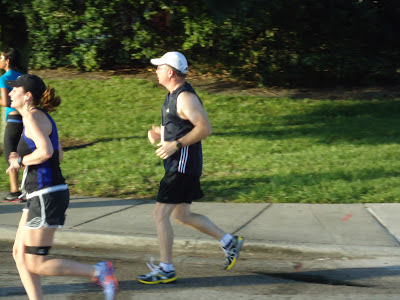 I normally bike 50-70 miles each Sunday and found that the UCF campus was 26 miles from my house, which was a perfect distance.  I left the house at 5:30 AM and got there at 7:05.  The weather was good, clear, and 65' F at the 7:30 start.  The course wound around the UCF Campus so everyone got an idea of how big the campus is.  I met his wife Louise right after the start and after I rode down the course to get some pictures, I joined her back at the finish line as Mike came in.  His time for the 5 miles was 50:50, which was his intended goal.  Well done Mike! 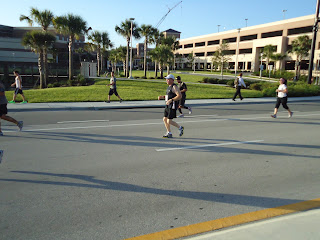 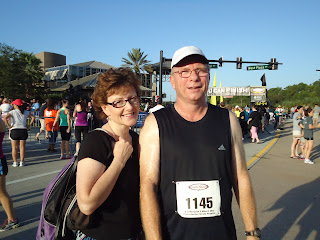 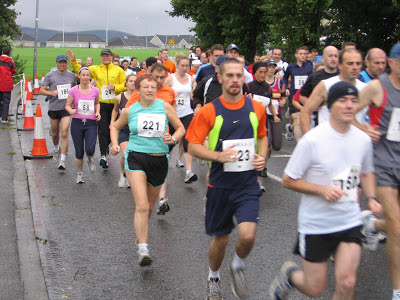 Posted by Jack Finucan at 2:06 PM No comments: