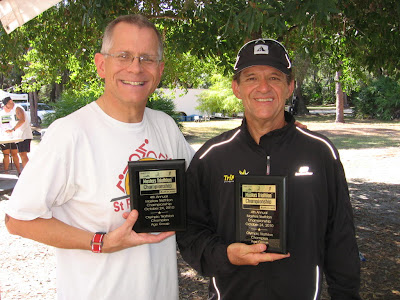 Some might call it dumb, some might call it chancy. But I didn't want the season to end on my middling performance in my first Half-iron distance triathlon last Sunday. So after much week long discussion and second guessing, I awoke at 4:00 AM this morning, gathered my thoughts, my bike, and my tri-gear and headed out to the Masters Championship Triathlon at Moss Park in Orlando. I like longer events so I chose the Olympic distance (.9 mile swim, 24 mile bike, 5.5 mile run) rather than the sprint. It was 66' at the start with water (wetsuit legal!) at 76'. I had a solid swim followed by a great bike (average speed 20.0 mph) and a very good (no problems) run with 8:35 mile splits, finishing at 2:30:11, which was good enough for 1st place. My old friend (and former/future competitor) Bill Floyd won the 60-64 age group ahead of me. (Pictured above on right with me). Bill is a USAT Certified Coach and you can visit his website at http://trifloyd.com/ . This was the perfect end to a perfect season of triathlons.
Posted by Jack Finucan at 5:15 PM 1 comment: 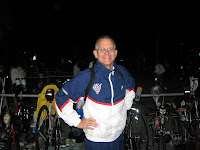 Well, after 102 triathlons, I've finally decided to do a Half-iron distance triathlon, 1.2 mile swim, 56 mile bike, 13.1 mile run. I can't say Half-Ironman 70.3 as that belongs to World Triathlon Corporation, which happens to be a client of my employer. I considered doing the Florida Challenge Half in Clermont in September but was dissuaded by Ken Junkins, a friend and competitor in my age group. Ken said the hills on the bike and the run with little shade and the run temp in the 90s make it a tough race (Ken won the 55-59 age group with a 5:31 time, 1 hour & 2 minutes ahead of 2nd place). I didn't think that was good for my first long race so I looked around and after considering the Miami Half, I chose the Atlantic Coast Triathlon on Amelia Island, just north of Jacksonville (a 2.5 hour drive is better than 5).

I raised my training level beginning in July, going to Lucky's Lake every Saturday morning for 2 laps, totaling 1.33 miles, and riding 60-70 miles each Sunday. My running was limited to a few long runs and a lot of short ones as the osteitis pubis still bothers me a little. My last weekend before the race was the final tuneup, with a Saturday morning Lucky's Lake swim followed by the Breast Cancer Bike Ride at David's World Cycle (25 miles). I got knocked over on the bike at a stoplite and suffered a vicious calf cramp and a bruised ego. Sunday, I got up early, did a 25 mile bike followed by a 6 mile run and felt totally ready afterward.
The following Saturday I headed north to Amelia Island and checked in at the Comfort Suites by the beach. I was given room number 103, when I suddenly realized this was my 103rd tri! The hotel was half a block from the race site and a block from the pasta dinner on Saturday night, so it was very convenient. I checked in, getting #170, and racked my bike. The transition area was well laid out in a parking lot split by a grass strip with 6 porta-lets and 2 changing tents. The olympic distance race (held at the same time) was on one side and the half-iron on the other. I met some really nice people at the dinner and then wandered down to the bike -filled transition area and spoke to several of the race officials including a really great guy named Phil Royal. 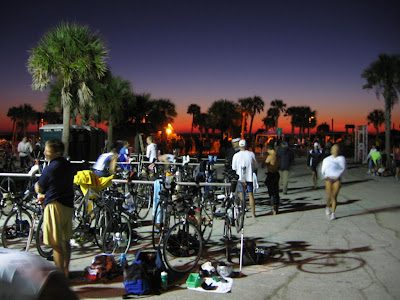 I woke at 3:00 and laid in bed until 4:00, gave up on sleep and got up and began mixing my Hammer nutrition (5 different bottles) before heading out to check-in, which opened at 5:00. Next to my bike was Kathy, who was doing the race with her fellow Tampa Bay Tri-gal, Jen. They were also first-timers and very excited. On the other side of me was a married couple Annie & John, along with Stuart, more first time half-iron distance competitors. About 7:00 the sky over the Atlantic began to brighten with the promise of a beautiful sunrise, no wind, and 1 foot waves. There were about 240 half-iron racers and 175 doing the olympic distance gathering on the beach for the start. The air temp was 56' and the water was 76' so conditions were ideal. 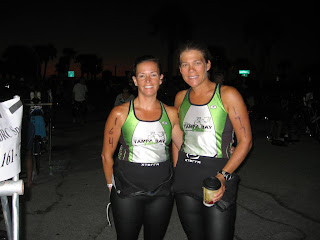 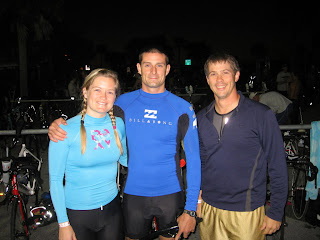 After a rousing version of our National Anthem, I headed down to the water to start in Wave #2. We all took off at the horn and I hung back, promising myself to take it easy on the swim. The sunrise was so beautiful I actually paused twice during the swim to look around and enjoy the moment and sight the course buoys. The 1.2 miles went quickly and after a brief encounter with a jellyfish, I hit the beach with a time of 41:33. 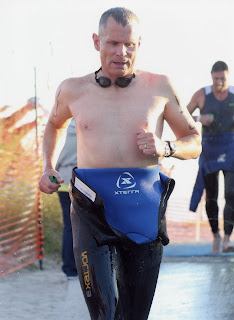 I jogged into transition, grabbed my bike bag, and entered the changing tent. I pulled off my wetsuit and put on my bike shorts/jersey, pulled my bike off the rack, and headed out on the bike course. We started out on A1A for several miles and then turned right to head towards the mainland. Unfortunately, a group of olympic-distance cyclist were ahead of me and in my concentration on catching them, I missed the turn. I caught my error almost immediately and turned back, losing only 1/2 a mile. At mile 17, I reached the intercoastal bridge and began the long climb up and over. After many miles on the mainland, I headed back over the bridge (spectacular view at the top!) and hit 29.7 mph on the descent. I was feeling great and my average speed was 19.6 at this point. I then headed to the south end of Amelia Island and over the Nassau Sound Bridge into Duval County. Crossing this 1/2 mile long bridge in the early morning was stunning as the Atlantic was just to the east. I went back over the bridge after reaching the turnaround and headed north on A1A towards the finish. The combination of a slight headwind, slight incline, and my own fatigue slowed my final average speed to 19.3 for the 56 miles, finishing at 2:55:55. 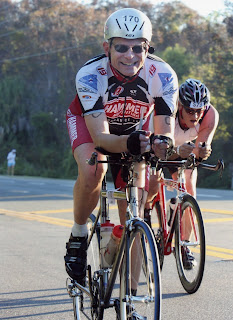 I quickly changed into my running shorts/singlet and stopped in a porta-let. I was treated to the sight of cramping calves twitching uncontrollably and took off on the 13.1 mile run. The run quickly became a walk as my body tried to quickly adjust to the new activity of running. I ran/walked for the next 8 miles and pain and minor cramps threatened to derail my race. The run through Fort Clinch State Park was exceptional though, as all the roads were heavily shaded by a canopy of oak trees. By mile 9, after 2 Hammer Gels and more water, I was feeling much better and my running pace picked up. I ran strong the last 4 miles, passing 2 of my competitors in the process. The finish line looked mighty good as I charged across it with a 2:39:45 run for total time of 6:33:32. I finished 8th out of 10 in my age group and 170th overall. Oddly enough, 170 was my race number too, coinciding with the Room 103/103rd tri. 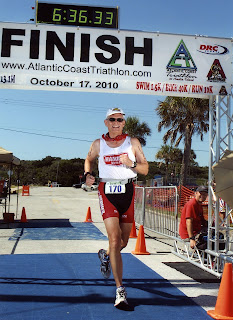 In closing, I have to say I had a great time in spite of my poor run. My PR for a half-marathon is 1:54:52 so it's easy to say I was way off. The venue, location, race organization, officials, volunteers, and race course were all first rate, so I can recommend this event to anyone. It was especially nice that the aid stations (every 10 miles on the bike/every mile on the run) was well staffed with cold water, gels, and a porta-let. This was a text-book example of a well-run event; hats off to DRC Sports ( http://www.drcsports.com/ ).
Posted by Jack Finucan at 12:19 PM No comments: