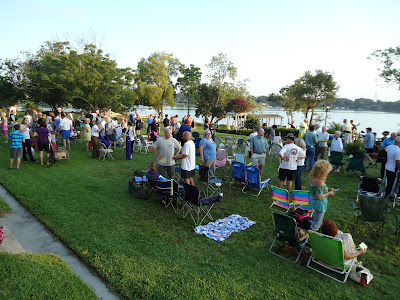 Dr. Lucky invited everyone to his home for an Easter sunrise service, lake swim, and pancake breakfast. An amazing 172 people showed up for the 7:00 AM service! Everyone packed away pancakes after a 1 or 2 kilometer swim and my wife Sandy made dozens of omlets for all. Great time!
Read more about Lucky's Lake at my July 2010 blog or go to the link on my home page.
Posted by Jack Finucan at 11:35 AM 1 comment: 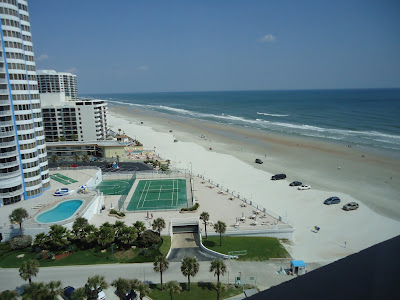 Beautiful Daytona Beach was the venue for my 105th triathlon. The Frogman Triathlon is an Olympic distance race that benefits the Naval Special Warfare Foundation, supporting Navy SEALS and their families. Rob Wallace, the race director, has 2 sons in the SEALS. 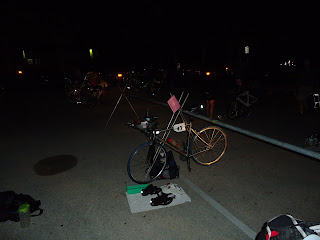 Since this was a longer race, the start was right at sunrise, 7:00 AM. The .9 mile swim was a bit choppy and it took a while for me to get into a rhythm. I exited the water at 29:51 and headed out on my bike. The only unusual feature of the 25 mile bike was going over the intracoastal bridge, which came at mile 4. It was a slow 10mph climb to the top, rewarded by a 32mph downhill on the other side. After about 8 miles on the mainland, I hit the bridge again for the return. I was blasting along at 21+mph south along the river when I realized that the wind had picked up and I was going downwind. After several turns, I was back on Atlantic Ave. which turned into A1A and a headwind. My speed was consistent at that point and I finished with an average of 19.6mph. Coming out of transition for the run, I headed north on A1A, which had the right lane closed for us. At the 1.5 mile mark, we turned right down a beach ramp for a 3 mile run on Daytona Beach, followed by a final 1.5 back on A1A. I passed 1 person on the run for a 3rd place finish out of 5. The 6.2 miles took me 1:03 for a 10:09 mile split. 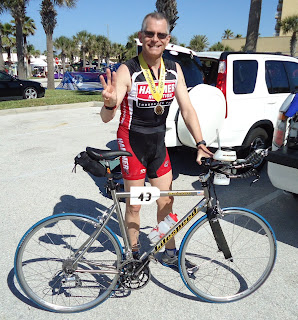 
Several retired SEALS spoke at the awards cermony which was a special treat.
Posted by Jack Finucan at 2:40 PM No comments: