For 19 years, I have been doing triathlons out in Clermont, run by Fred Sommers.  However, I have never done any of his long races, The Florida Challenge Half-iron or the Great Floridian Full-iron Triathlons.  Two years ago, Fred moved the Florida Challenge to cool April from hot September and I signed up for today's race last Halloween (it was on sale!).  Well, today I discovered the race is as tough as it's reputation!  This would be my first triathlon in the 60-64 age group too.

I awoke at 4:00 AM to leave by 5:00 as registration opened at 6.  It poured rain all the way there and I thought, "this should be interesting".  However, by 6:30 it had stopped so transition filled very quickly.  The day dawned with an overcast and a light breeze so Lake Minneola didn't look particularly inviting.  The water temps were around 76'F so I made the decision to use my wetsuit.  As we all stood by the water for the National Anthem, the flag began to fill and stand out in the breeze.  I took off at the gun and settled down to a nice easy rhythm.  It took me 38:40 to finish the 1.2 mile swim and I stripped off the wetsuit and put on my bike clothes.  This time was faster than my 41:33 swim in the Atlantic for the Atlantic Coast Tri in October 2010.

I promised myself to take it easy the first few miles so I was warmed up when the first hills loomed up at mile 5.  Riding uphill into a stiff headwind was countered after a turn by very quiet downhill with a strong tailwind.  Thus began the day of hills and wind.  I was ready for Sugarloaf at mile 26 (having ridden the course in January; see previous post) and was very happy to climb all the way without putting a foot down.  At mile 30, my right hamstring cramped and I stopped to stretch it out.  The rest of the 56 miles were hills and wind with some blistering 35-40mph downhills.  On-course support was excellent with the odd omission of any porta-pottis.  I rolled into transition with a time of 3:39; AVS 15.3mph.  On the very flat and windless  Atlantic Coast bike, I finished with a 2:55:55; AVS 19.3mph. 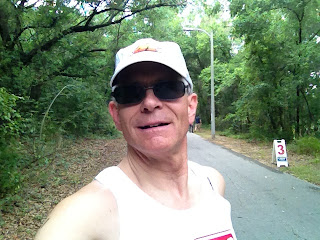 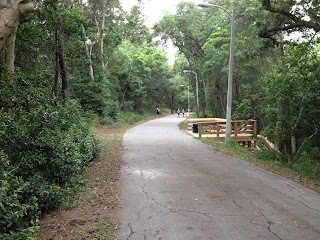 I felt a bit fatigued as I began the half-marathon so I ran/walked the first mile.  My left hamstring started to get sore early and stayed sore all through the run.  I began passing and getting passed by Jamie Myers from Sarasota so we began running together until one or the other walked a bit.  The Minneola bike trail  out-and-back course worked well  and had a bit of shade.  The field was a bit thin when I finally headed into the finishing chute for a final time of 7:16:22.  The 13.1 mile run took me 2:43, for mile splits of 12:27.

I placed 2nd out of 4 in the 60-64 age group so I was pleased with the result.  The skies finally opened and it poured about an hour after the finish.  It was a good day.
Posted by Jack Finucan at 8:47 PM No comments: