Tremendous weekend! The Seminole County Triathletes presented a Half-ironman Training weekend starting with a 1.2 mile swim on Friday evening in Little Lake Howell (thanks, Terry), followed by a 56 mile bike from David Houle's D2 Cycling Center in Sanford, concluding with a 13.1 run on the Seminole-Wekiva Trail on Sunday morning. About 15 people signed up with about 10 doing all 3 legs (including me).

The swim was great, with a well marked course (of water-ski buoys) in calm, spring fed Little Lake Howell. You could tell when you swam over a spring because the water got colder instantly. We were treated to a nice buffet on Terry's lanai as we watched the sun set over the lake.

Saturday's 56 mile was due to start at 7:30, so I arrived at 7:00 and got my gear all ready. David Houle hosted the event at his shop, the D2 Cycling Center in Sanford, just north of Route 46.

We took off promptly and headed south being led by 3 very fast members of the Seminole Cyclists club, including David's wife Shannon. I dropped back a few times but would catch the group again at stoplights. Around mile 25, the 3 leaders took off and I caught the second group at the 1st SAG stop, right on Lake Monroe in downtown Sanford. We all finished together after the lap around Lake Monroe. My average speed was 18.8 mph for the entire ride; that's close to race pace for the 56 miles. 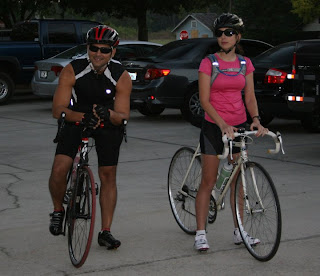 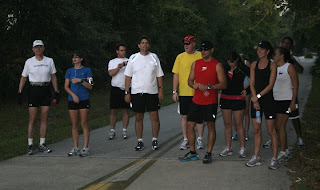 Sunday morning we all met at the Markham Road station of the Seminole-Wekiva Trail. West Volusia Runners helped coordinate this and brought a sizeable contigent with also. 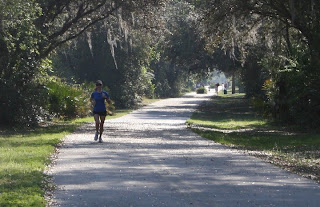 Most of the SCT people were doing the 13.1. We started out pretty fast and I stayed quick despite my efforts to slow down. I was feeling good and figured just go for it. Jennifer from WVR was already at the water stop/turnaround at the Jones Trailhead at Long Pond Road and started after me. She kept pushing me and I stayed with her, doing 8:30 mile pace. We caught Rebecca with about 3 miles to go and she stayed with us and surged ahead, forcing me to keep up. My PR in the half is 1:54:52 (2005 OUC Half/Orlando) and the time was pretty close. 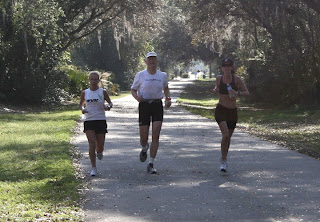 A big push at the end got me in at 1:57:14 so that was a great finish. Thank you ladies for pushing me so hard. After a rest/stretch at the trailhead, most of us headed over to D2 Cycling for the BBQ. David & Shannon outdid theirselves with the food and we enjoyed watching the pictures from the weekend on the video screens. All together a great training weekend.
Posted by Jack Finucan at 10:35 PM No comments: