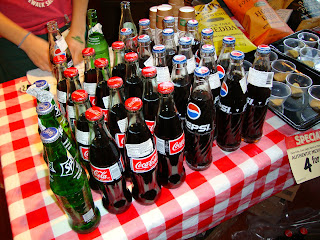 Just a quick note on something amazing I saw yesterday at The Fresh Market, a high end/gourmet supermarket chain that has a store near us. They had a product tasting yesterday and several of the products featured were Coca Cola, Pepsi Cola, & Sprite. So what, you say. What was incredible is that these were IMPORTED from MEXICO and contained REAL SUGAR instead of High Fructose Corn Syrup/Corn Sugar. It tasted like the Coke I drank as a child. I have recently seen ketchup and soda with "NO HFCS or MADE WITH REAL SUGAR" on the labels.

I use Hammer Nutrition products exclusively and they use no simple sugars in their products but are really opposed to HFCS. The July 2010 edition of their magazine, Endurance News, had a great article about a March 2010 study done by Princeton University. Three groups of rats were given different diets. Group A got rat chow and water, Group B got rat chow and HFCS water (at 1/2 the concentration of soft drinks) and Group C got a high-fat diet. The result was a increase in weight by some of the rats on the high-fat diet but all the rats on the HFCS water became obese. They found that the HFCS is processed by the liver into fat while sugar went into the bloodstream to provide a glucose/energy boost (though temporary).
Reference: Bocarsly, M.E., et al. "High-fructose corn syrup causes characteristics of obesity in rats: Increased body weight, body fat and triglyceride levels." Pharmocology Biochemistry and Behavior, 2010; DOI 10.1016/j.pbb.2010.02.012 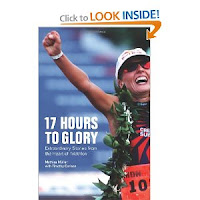 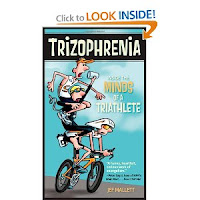 Here are 2 great books I received as gifts: 17 Hours to Glory by Muller/Carlson and Trizophrenia: Inside the Minds of a Triathlete by Jef Mallet. Jef is the cartoonist/triathlete who created Frazz, the songwriter/school janitor/triathlete cartoon character. Jef's book has some hilarious observations on triathletes and makes us laugh at ourselves. ("How old is your new girlfriend? She's 30-34 age group.")
17 Hours to Glory profiles 17 Pro or Famous triathletes in their quests at the Hawaiian Ironman. It really give you an insight into the training levels of Iron-distance athletes. Both are available at Amazon.
Posted by Jack Finucan at 12:58 PM 1 comment:

This was my first race at Moss Park (just southeast of Orlando International Airport) this year. Buttar.com holds a Tri Sprint on Saturday and Olympic distance on Sunday; the lake is always calm, the 24 mile bike course is flat and the 5.5 mile run is in the woods on hardpack sand. 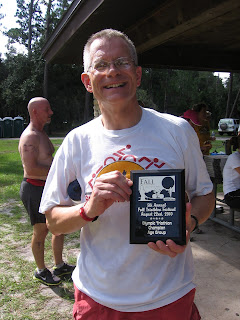 A brief shower as I arrived before dawn allowed the humidity to rise as the sun did likewise.

I've done this course multiple times in the past so I've recorded my splits many times. My bike time and run speed were almost identical to my last race here in October 2009 but I was surprised to discover that I took 5 minutes off my best swim. All my additional swim training for the half-ironman in October is evidently paying off. I've had a cramping problem in my hamstrings on the run several times in the past due to the flat bike but a short stretch in T2 and several Endurolite capsules allowed me a good run in the heat/humidity with no issues. I was happy to finish first as all my competitors were unknown to me. My time was even fast enough for a third place in 50-54, the next younger (and more crowded) age-group. Two more races ahead for this year.
Posted by Jack Finucan at 9:37 PM No comments: 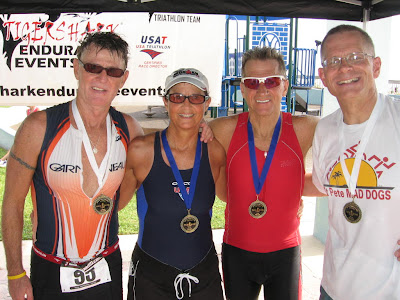 Today was the longest of the Tigershark/Rice & Rose Sprint Series, with 800 yard swim, 15 mile bike, and 4 mile beach run. The overcast sky and flat water made this race more pleasant than 2 weeks earlier, which had big surf and a very hot run. Jan Thompson brought her husband Danny Hicks and David Burg with from Tampa. All three are Ironman finishers and pretty fast. David beat me by 2:06 even though I had the fastest run, with a final time of 1:44:50.
Only 1 other person pre-registered in my age-group so as I climbed the ramp from the beach, I saw Butch exiting the water. Keeping an eye out for him at the first bike turnaround, I calculated I was 36 seconds ahead so I pushed hard on the bike. A big surprise came near the bike finish though when I came upon a unknown cyclist with "59" on his calf. I passed him quickly but we were in transition in just a few minutes. I headed out on the run and at the 2 mile turnaround, I was 1:00 minute ahead of him. As I concentrated on keeping my pace high, I had a sudden visualtion of my passing him on the bike; he had flat handlebars, which meant he was in the "Fat-tire" class. I finished strong but never saw David Burg ahead of me; there were actually 4 in my class. Sometimes you never know where you are in a race until the results are posted.
This ends the Tigershark Series for 2010 with my two First Places and today's Second.
Posted by Jack Finucan at 12:52 PM No comments: