Today was the 2nd Olympic tri of the season at Moss Park in Orlando.  Upon arriving in transition, I met 2 fellow St. Pete Maddogs, Bobbie & Glen Gullickson.  She was doing her first Olympic distance and he was doing the Aquabike. (Bobbie eventually won her age group and Glen got a 3rd OA) 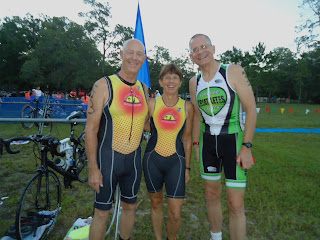 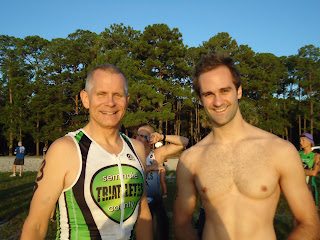 A few minutes later, I ran into my co-worker at Ernst & Young, Chris Louthan and his girlfriend Amy.  Both had done the June tri here but Amy "touched the floor' on her bike last weekend, so she was sitting this one out.  I gave her my camera and she took some great photos. 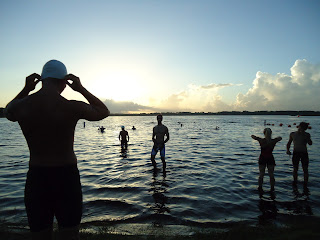 The sun in front of us rose in a crystal blue sky and we were off on the swim.  I had a great swim, taking 4+ minutes off my previous time last month.  Heading out on the bike, a surprise was waiting for us.  A large dark cloud was looming up in the east, and around mile 8, the sky opened and it poured.  It actually felt good and I negotiated the corners slowly in the wet.  I passed 1st and 2nd place on the bike and increased my lead as the race continued.  I was cheered on when a tremendous rainbow arched over the road near the end of the first lap.  The showers moved away by mile 15 and I concentrated on putting on some speed, finishing with an average of 20.2 mph.

I had a quick transition and headed out on the run course, passing a yoga-in-the-park class in session near the west boat ramp.  The shaded trails are nice in spite of the heat and I averaged 8.17 mile splits over the 5.8 mile course.  I finished 1st out of 4 with a time of 2:24:15, much better than my 2:30:23 in June.  Chris also had a great 12th overall finish, taking 1st in his age group, with a 2:07:38, nearly 9 minutes faster than his June time.  Afterwards, I headed home to my wife Sandy to celebrate our 33rd wedding anniversary. 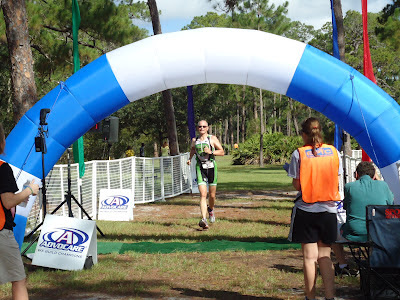 Posted by Jack Finucan at 5:03 PM No comments: