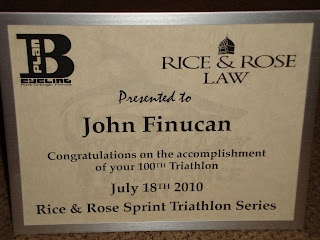 On July 20, 2010, I completed my 100th triathlon. I stumbled on this upcoming event several years ago when I totaled all the race numbers I had saved over the years (with the race data inscribed on them). At that time it was a very surprising 72 which in turn provided me with a goal of 100 in the not too distant future. Looking back at the 100 Triathlons I've done, you can view the statistics: 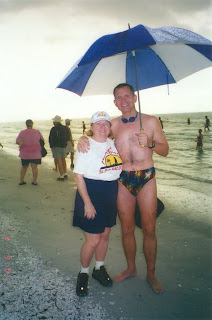 But I think the greatest part of competing in this sport is all the great people I have met. My wife Sandy has been extremely supportive, emotionally with encouragement, physically by being there, and nutritionally with her wonderful meals. (Pic on left is from the 2000 Sanibel Triathlon)
Others who contributed to my success are my friend & occasional coach, Jeff Cuddeback (pic below with former pupil Olympian Hunter Kemper), his wife, Dr. Kim Watson, who got me back in shape after a broken collarbone in 1995 and several other injuries, 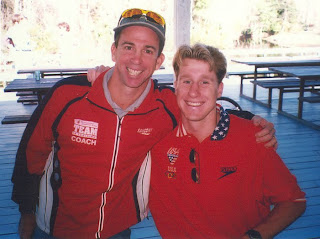 Alec & Lera Rukosuev (National Training Center coaches) for their advice over the years, the late Jim Ward (for years the oldest Ironman World Champion), Bruce & Maddie Olster, David Sanborn of David's World Cycle, for his continued support, Race Directors Fred Sommers/CFT Sommer Sports, Zahid Buttar/Buttar.com, and Rob Wallace/Tigershark Endurance Events, USA Triathlon for their guidance & management of this young & growing sport (when I joined it was Tri-Fed USA), the St. Pete Maddogs Triathlon Club, all the wonderful volunteers and referees like Charlie Crawford who labor on hot Sundays so we can race, and many others who I've met over the years. And a big thank you to the fine people at Hammer Nutrition for the wonderful products that I used for many years. Their free guidebook is a great resource for endurance athletes. http://www.hammernutrition.com/ 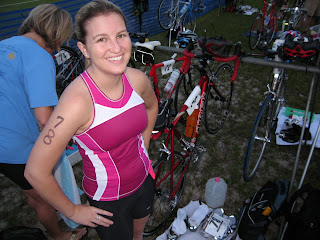 One of the neatest experiences I've had was when a co-worker, Hollie Finley (pic on left), asked me to coach her in her first triathlon. Over several months, we found her a bike and the accessories and did practice rides and transition rehearsals. She then did her first race at Moss Park.

Looking ahead, I've just signed up for the Atlantic Coast Half-ironman Triathlon on October 17 at Ameila Island, Florida (just north of Jacksonville). This will be my first half-iron race (1.2 mile swim, 56 mile bike, 13.1 mile run).

People ask me why I did 100 triathlons. It’s not like I planned on doing one or two and then moving on. I look upon triathlon as a fountain of youth; something that will keep me fit and moving for the rest of my life. But endless training with no goal is to me without purpose. Triathlons, whatever distance, give you a point and a goal to achieve, if just to have a good time. After all 17 years and 100 triathlons, I still get excited on race mornings. I also still say to myself during the swim, bike and run, "Boy, is this great!"! That's why I keep going.
Posted by Jack Finucan at 8:46 PM No comments: 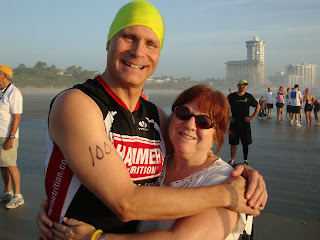 This race was #100! I returned to Daytona Beach Shores for the second of the 3-race Tigershark series. My wife Sandy again rose at 4:00 AM to cheer me on. Rob Wallace, the race director, puts on a great event at a really great venue. The only glitch was the rough surface of US A1A but when we turned off of Dunlawton Ave, surprise!, A1A had been completely repaved! I was really looking forward to the 12 mile bike now but this was tempered by seeing the Atlantic Ocean and the 600 yard swim ahead. Despite the lack of wind, the waves were running 3-4' with a strong south-to-north current. At registration, I was delighted to find I was given #100 as my race number for my 100th triathlon! 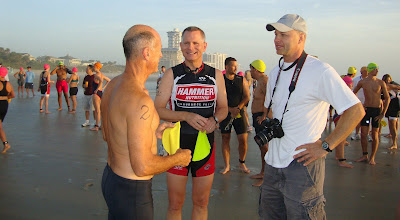 Ken, Joe, & I discuss past and future races. 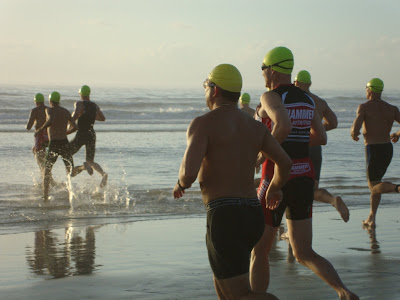 All men were in the first swim wave, so we all charged into the waves head on. I'd been reviewing my rough surf technique since May and it really helped diving into the breaking waves. Finding the swim buoys in the rolling water increased the challenge but I exited the water in 18:27, not bad considering the waves. I jumped on the bike and quickly got into a strong rhythm. The smoothness of the new pavement enabled me to quicken my speed to an average of 20.8 mph over the 12 miles. 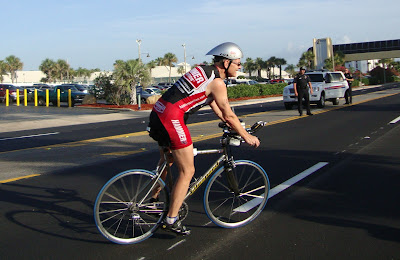 I shot out of transition and headed on down the beach for the 3 mile run. It was starting to get hot in the early morning sunshine but it's a joy running by the ocean and I maintained a strong pace, completing the run in 26:41. As I approached the finish I heard the announcer calling out my name and that this was my 100th triathlon. Sandy was there with a big kiss and received a sweaty hug from me in return. 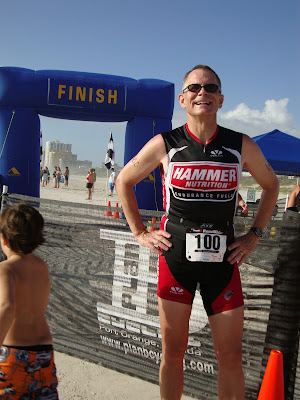 My final time was 1:25:12, good for 1st in my age group.
At the awards ceremony, Rob Wallace presented me with a plaque commemorating my 100th, as well as my 1st place age group award. My friends all congratulated me and as a capper, I won a door prize for a RoadID wrist band! A new friend from the West Volusia Runners, Ken Allen, who entered the tri after encouragement from me, picked up 1st place in the 70-74 age group. Joe Evans and his girlfriend Charisse, was there too as well as Howard Montgomery. We finished the day with a celebratory dinner at McCormick & Schmick's seafood restaurant. A great 100th triathlon! 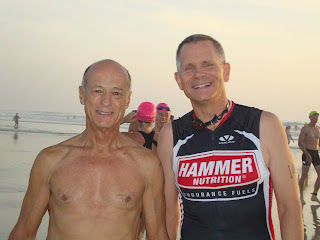 Ken Allen with Jack waiting for the start.

Posted by Jack Finucan at 8:33 PM No comments: 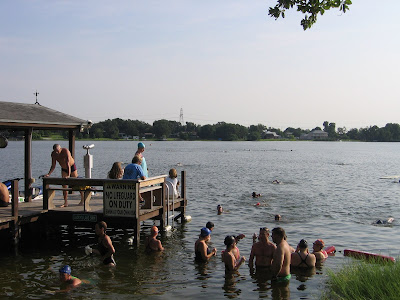 I finally got out to the Lucky's Lake Swim on Lake Cane by Universal Studios. I heard about this last year but never got a chance to go. Dr. Lucky Meisenheimer generously opens his home and lake up to anyone who want to swim. The lake is one kilometer across and back and the swim starts at 7:45 on Saturday morning. You can use the bathrooms and showers by the pool too. There were about 85 people there this morning, all having a great time. I swam 1 lap at 24:12 and then another at 26:00 after a 5 minute rest. So 2 kilometers (equals 1.32 miles) in 50:12; not bad. Had a great time; I'll be back soon.
For more info, go to http://www.luckyslakeswim.com/.
Here's a Growing Bolder video: http://growingbolder.com/media/sports/water-sports/luckys-lake-swim-202905.html#content_tabs 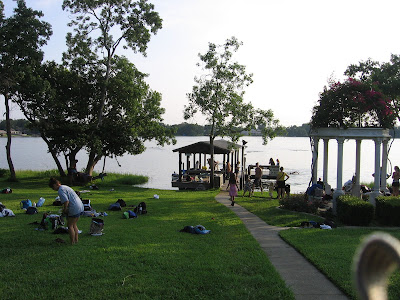 Posted by Jack Finucan at 4:53 PM No comments: