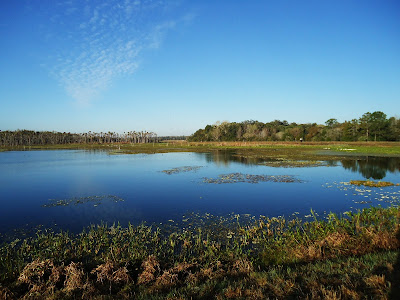 The first event of the New Year! Orlando Xtreme Half-Marathon is an annual event, an off-road 13.1 mile run at the Orlando Wetlands Park, on the very eastern edge of the city. (If you click on the picture above, you can see runners across the lake.) My friend Bernadette signed up early and convinced me to join her and another runner from West Volusia Runners, Rick Paine. There is also a 5K and 10K at the same event. The trails are really dirt roads that twist and wind through the park. The half-marathon course was a 2 and 1/2 lap run for the total distance.
It started off cold (36') with a crystal clear sunrise at 7:03 AM. The 3 events all started at 7:30 at 3 different spots so we never saw the others. A co-worker 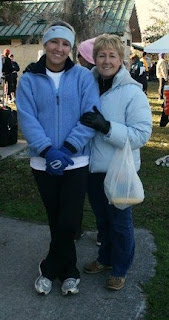 Rhonda brought her daughter, Ashlee, to run the 5K. Since I was off on my race, I missed Ashlee's victory as First Female Overall. The picture to the right shows a proud Rhonda with Ashlee.
Rhonda snapped the pic below of me as I finished lap 2. 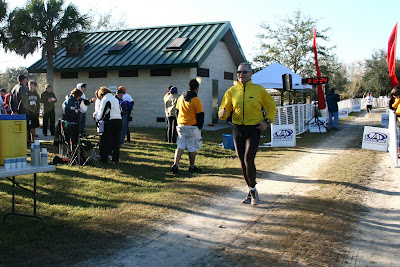 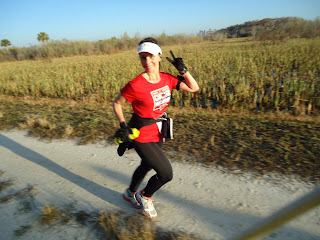 At the start of the Half, Rick took off like a bullet and Bernandette and I ran together for the first mile. Then her ITB problem acted up, forcing her to walk, so she sent me on. I began a methodical climb through the field, averaging 8 to 9 minute miles. The weather was perfect after the sun came up and it was great running in the early Saturday morning. Very scenic course through the wetlands. I decided to carry my Hammer Nutrition bottle filled with a 240 calorie mix of Perpetuem rather than use a belt carrier. The next day my biceps were aching from the hundreds of bicep curls I performed during the event; back to the belt next time! I supplemented the liquid with Hammer Gel, Endurolytes, and Anti-Fatigue Caps and felt strong throughout the entire race. I really cranked it up for the last mile as my GPS showed me doing 7:30 pace near the end, with a final time of 2:07:24. The result was an average time of 9:17 per mile over a 13.70 mile distance, so the course was a little longer than a half-marathon. My PR in the half (on asphalt) is 1:54:52 at the OUC Half in 2005. 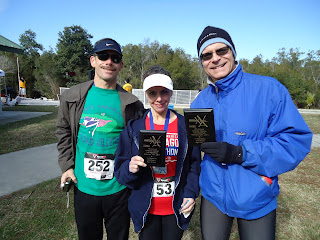 Rick had finished ahead of me with a 1:44:47 and Bernadette came in with a 2:18:07. When they announced the awards, we all had finished second in our categories! A very satisfactory result to a great day!
Posted by Jack Finucan at 5:58 PM No comments: