Most of you know I'm a big fan of Moulton bicycles and have owned 8 in my life with 5 in the stable now.  I wrote an article about my triathlon experiences with the Moultons and it was just published in The Moultoneer magazine.  Click on the image to enlarge it.

Watch this video for a quick explanation of The Moulton Mystique:
https://www.youtube.com/watch?v=Cv-a6gq_0To 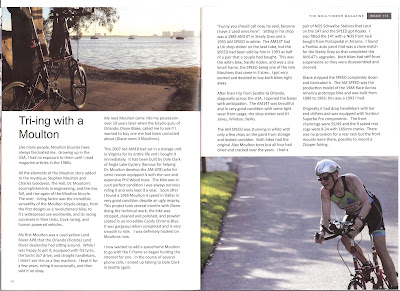 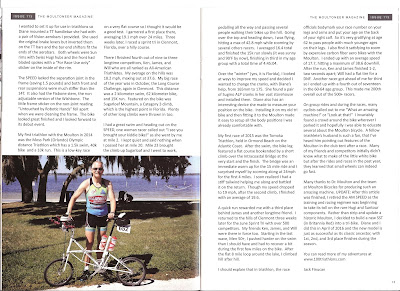 Posted by Jack Finucan at 9:10 PM No comments:

Saturday, October 22, was the Great Floridian Triathlon in Clermont.  This 26th Annual event is an "iron-distance" race without the Ironman price.  The course change last year to a 3 lap discipline allowed the creation of a 1 lap and 2 lap event also.  I did the 1/3, with a .8 mile swim, a 38 mile bike, and an 8.7 mile run. Several fellow Seminole County Triathletes competed also in all 3 distances.

Fall arrived on Saturday morning with a 57' temperature and a stiff west wind (Friday morning was 70').  I arrived early to get a good parking spot and rack my bike even though my race didn't start until 9:00 AM.  Wetsuits (which I dislike) were legal so as I sat in the car with the heater going, I wondered if I should put mine on.  I decided to skip it and headed to the swim start and found the water temp was 74' which made for a pleasant swim even with the wind-driven chop.  With the late start, the sun was high and I really enjoyed the swim which took me 38 minutes.  I debated whether or not to grab a bike jersey to wear over my tri-top as it still felt cool (60') but decided to forego comfort for speed.  This turned out to be a good decision as I was comfortable and also noticed several riders stopping to pull off windbreakers in the first 10 miles.  The bike course seemed to be a continuous series of hills; for the whole distance, I felt I was either climbing at 8 mph or descending at 30+.  I rode through Clermont, into Monteverde and then the Ferndale loop.  Buckhill Road lined up ahead of me at mile 22 and Sugarloaf Mountain (Category 3 climb) arrived at mile 26.  I had trained the latter part of the summer specifically for this race and shifted down and climbed all the way up.  The Moulton performed well as usual and I had quite a cheering section among the spectators as I pedaled to the top.  Sommer Sports had a shuttle running between the race start and Sugarloaf so families and friends could watch their athletes climb the mountain.  I shot down the mountain at an all-time high speed of 42.7 mph which is quite thrilling on a bike.  I passed 3 or 4 people in my age group on the bike leg.  Rolling into the transition area at mile 38, the computer showed an average of 16 mph but official time had me at 16.2.  Either way I was quite happy with my pace.  Doing this 3 times for the ultra-distance must really be tough.

After a 1 minute bathroom break, I began the run, which consisted of 2 out-and-back loops on the Lake County bike trail for 8.7 mile course.  All the water stops were well manned with anticipation of the long evening runs coming up.  Sommer Sports had your first name on your bib so the volunteers could cheer you on personally.  Temps were in the middle 70s by then.  I ran conservatively initially as my right quad was hurting a bit,  I stopped to massage it twice and the pain went away.  From mile 2 to 6, I picked up speed and passed 2 more people.  Nearing the final turn-around I closed up on the 4th place man and he was eyeing me as we did the last turn.  We both picked up the pace but he had a bit more speed and I finished 59 seconds behind him for 5th place out of 13.  My overall run splits were 9:46 per mile at 1:24:53.  My total  time was 4:27:32 for the entire course. Longtime friend and competitor Ken Junkins won my age group with an amazing 3:31:55, nearly an hour ahead of me and 45 minutes ahead of 2nd place.  In her first year of triathlon and her longest race ever, Kerry Librada Girona won her age group with a 3:35:06 and finshed 4th Female overall.  SCTer Meggan Ann Johnson was very happy with a 3rd and everyone else had a great time including Joe Briatico who did his first iron-distance triathlon.


Posted by Jack Finucan at 5:45 PM No comments: