My friend, Mike O'Leary, did his first 10K today in Winter Park.  If you recall previous posts, Mike caught the running bug when he arose early on a Saturday morning in 2008 to drive me to a 10K in Dublin, Ireland.  He's trained hard, going from 5Ks to a 5 Miler last fall to today's 10K.  A heavy downpour ended just as the race began on Park Avenue in downtown Winter Park, soaking everyone.  I wanted to surprise him but we failed to connect before the start due to the huge crowd of 2,500 runners.  I found him at Mile 5 and we ran to the finish together.  Mike finished with a great time of 1:06:09 with 10:38 mile splits.  Well done Mike! 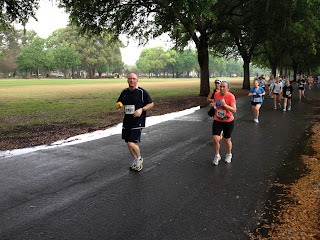 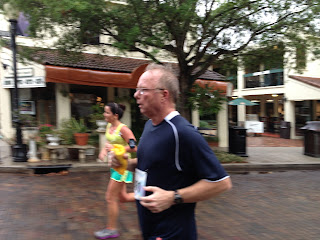 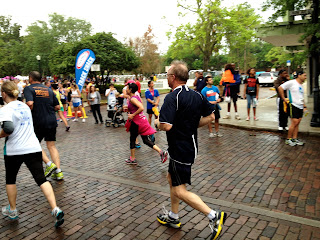 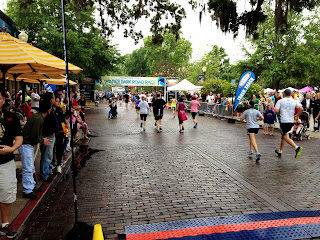 Also racing were 2 co-workers from Ernst & Young, Kevin Casey and Paula Yeomans along with Sarah Buchanan, an ex-EY co-worker.
Posted by Jack Finucan at 8:32 PM No comments: 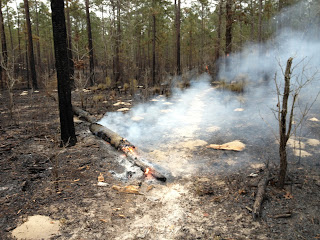 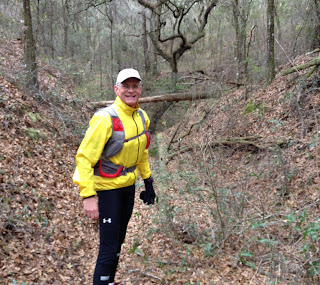 On Sunday I ran the first Long Play Ultra Run in Brookesville, Florida.  Based in the Withlacoochee River Wilderness Area, this is the site of the Croom 50 Mile Run in April.  Today's distance was 33 1/3 miles, as the date was 3-3-13.  The 6:30 start saw temps at 38' and overcast, pretty cold for Florida in the winter.  As long as there is no rain, I can handle the cold.  The race was a single, full loop, billed as a "fully runnable" course.  Also, there was a 5 mile and 13.1 mile race too.  About 100 runners faced the 33.3 mile challenge. 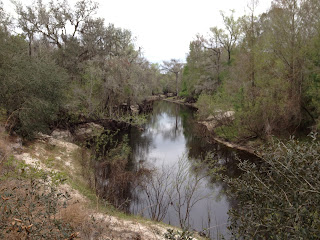 We started just as it got light and ran on asphalt trail for the first 1.5 miles.  I ran my own pace and hung back while everyone else took off.  The first surprise was running through a fire area with a few fires still burning.  Several big hills loomed up ahead which were a tough climb and then I encountered the first of 3 sinkholes.  The trail ran steeply down and up the sinkhole, which covered about 10 acres.  It was soon evident that this course was turning out a lot tougher than my runs in Wekiwa.  My speed slowed to about 12:30 miles and I walked up some of the big hills.  As I went deeper into the forest, it seemed if I wasn't climbing, I was descending; no flat areas at all.  After the water stop at 17.5, I headed toward the river, getting slightly off course for a bit.  Along the river, much of the trail had been under water and was heavily rooted, making running very hazardous so I reverted to a careful walk. See pic below; blue blaze indicates trail. 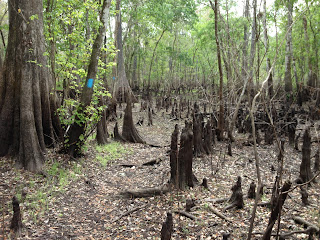 My times here dropped to 15:00 miles and I almost tripped 4 times.  It was a pleasure to climb away from this at mile 23.5.  Two more sinkholes and many more hills awaited me including a very large hill that I skirted for awhile.  I remember thinking "Glad I'm not climbing that!".  Just ahead, however, the trail turned sharp left and I began the climb; nice view at the top!  After mile 28, it just became a painful slog to the finish.  I had hoped to finish between 6 and 7 hours but ended the race with a 7:53:55 for a 13:38 mile split.  This placed me at 33rd overall out of 45 finishers with a 4th of 5 in my Age Group.  My Garmin showed 34.75 miles (since I went off course) but the Race Director said the course turned out to be 34 miles so I didn't do much extra.  Several other people got lost a bit but one guy finished with 40 miles.
My Garmin also showed Calories Burned: 4,306.  But the biggest surprise was the readout for altitude; 8,414' climbed and 8,638' descended; a lot more than I'm used to.  I had no problems with nutrition, using 4 bottles of Caffe Latte flavored Hammer Perpeteum; about 350 calories each.  Also, 1 Hammer Gel shot (100 calories) every hour and a Clif soy protein bar (275 calories) at mile 20.  I also took Hammer Endurolytes and Anti-Fatigue Caps once an hour through the day.  It was 48' and still overcast at the finish; I would have enjoyed a sunny day more. 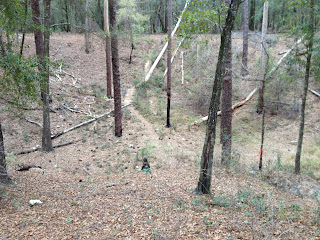 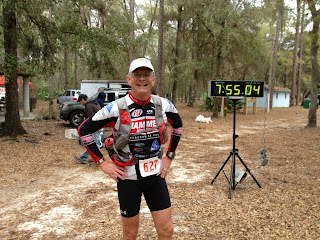 Posted by Jack Finucan at 6:01 AM No comments: