Saturday was the fourth and last Clermont Sprint Triathlon of the year.  I was looking forward to a strong finish for the year as I missed the third race due to Sandy's knee replacement.  Many of my friends from Seminole County Triathletes were there along with my usual competition.  Weather was perfect at 73' at the start and Lake Minneola had cooled down from Hurricane Hermione's heavy rains the previous weekend.  I racked my bike right next to a big Hammer Nutrition sign too.

As the sun poked over the horizon, I had a great start to the swim and felt strong throughout.  Exiting the water in 9:43, I hopped on my bike to began the circle around the lake followed by the hills back to town.  I rode conservatively, saving my energy for the big climbs in the last 4 miles. After the climbs, I rocketed down the big hill, hitting a maximum speed of 39.3 mph.  I rolled into transition, completing the course with an average of 18.5 mph.  My run began strong and I felt great all the time heading to the turnaround at 1.5 miles. Ken Junkins, the eventual winner, waved at me heading back as I was going out. Coming up to the waterstop at 2 miles, I caught and passed a man in my age group, 60-64.  I figured he would start chasing me as soon as he saw my age on my calf, so I picked up the pace.  Glancing back occasionally for the next 3/4 mile I saw no one.  With about 400 meters to go, I saw the guy running hard, trying to catch me.  I began running harder but saw he was still closing.  I really poured it on and turned into the finishing chute,beating him to the finish line!  I then looked at his calf and saw his age: 51!  It was the wrong guy!   I ran the 5k in 25:26 for a 8:12 mile split; my overall time was 1:14:22, good for 6th place out of 13.  Ken had finished in first in 60-64 over 10 minutes ahead of me too!  I don't think I'll ever catch him.  My friend Kerry Libroda Girona finished Women's Overall in second behind her coach, 10 time Ironman winner, Nina Kraft.  This is Kerry's first year of triathlons!


Posted by Jack Finucan at 9:07 PM No comments:

Thursday evening, September 8, was the Splash & Dash training event put on by Sarah McLarty at the Clermont Waterfront Park.  The special attraction at this one was the appearance of 2016 Olympic Triathlon Gold Medalist Gwen Jorgensen and a group of other Olympians.  Competitors from Australia, South Africa, Hungary, Canada, Ireland, and the USA attended.  I left work in downtown Orlando at 4:00 and arrived there just before 5:00 for the 6:00 event.  Between the tri-children and adults, about 125 people showed up to see this amazing group of athletes.  Gwen worked at Ernst and Young (my employer) in the Milwaukee office after graduating college in 2010 and we exchanged emails several times back then.  She left the firm to become a pro and has won many ITU World Cup races and two World Championships since then.  Her 2012 Olympic bid in London ended with a flat tire on the bike leg so that made the 2016 Rio victory even sweeter.

I swam at Lucky's Lake on Labor Day three days earlier and found out later she was one of the many Olympians who swam by me (very quickly) on my second lap.  Today, the children started first and then the adults on a two lap 1200 meter swim followed by a 5k run.  With a race on Saturday, I took it easy and only did one lap and found the Olympians exiting the water with me.  However, they did TWO laps to my one!  Everyone took off down the trail for the two lap run with the Olympians setting the pace.  Gwen finished in a dead heat with two Australians, Emma Moffat and Charlotte Mcshane alongside.

Gwen and the others signed autographs and posed for photos in the next hour and everyone really enjoyed the experience.  I also got to meet Charlotte Mcshane, an Australian team member who is originally from Scotland  What a great group of people! 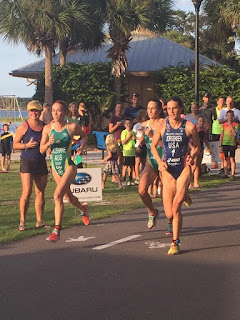 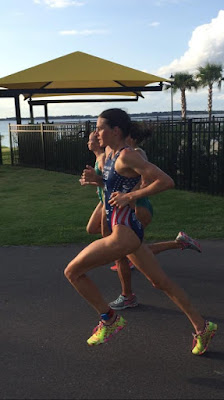 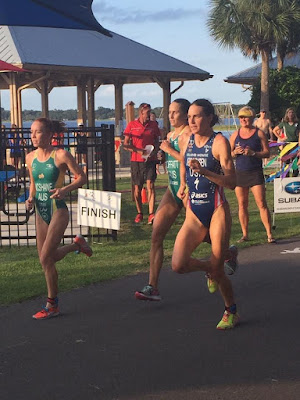 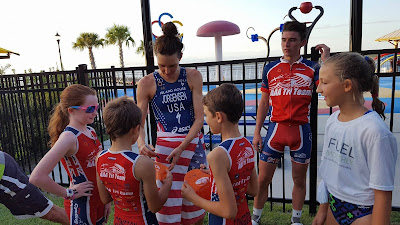 Posted by Jack Finucan at 8:24 PM No comments: